Chennaiyin would be upset by their loss in the opener against Bengaluru because they had been the better team by some distance. 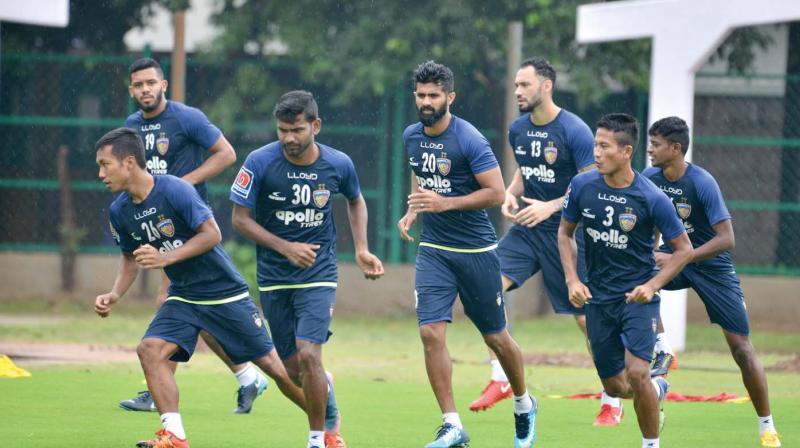 Chennaiyin FC players at a training session ahead of their ISL match against FC Goa.

Having lost their opener against Bengaluru FC by a goal, Chennaiyin would welcome FC Goa, who were held by NorthEast United 2-2 in their first match, with some desperation. But history offers some comfort to Chennaiyin as they rebounded spectacularly under the guidance of John Gregory to seal the title last season after an inauspicious start.

Nothing much has changed on paper for both teams as they prepare for the important meeting. Gregory has the core of the victorious team, barring Portuguese Henrique Sereno whose courage and conviction at the back was central to Chennaiyin’s triumph in season four. As captain, Sereno led from the front.

Chennaiyin would be upset by their loss in the opener against Bengaluru because they had been the better team by some distance. More important, CFC failed to take their chances with star striker Jeje Lalpekhlua missing two gilt-edged openings.

The absence of defensive midfielder D. Ganesh, who is almost out of the season with a knee injury, and Bikramjit Singh, who joined Delhi after season four, would be felt. Anirudh Thapa and Germanpreet Singh have the onerous task of filling their shoes.

FC Goa, under Spanish coach Sergio Lobera and captain Ferran Corominas, will be eyeing for revenge because Chennaiyin ousted them in the semi-finals last season. Coro, the leading scorer in ISL4 with 18 goals, has already struck twice. Chennaiyin captain Mailson Alves and Sereno’s replacement, Eli Sabia, will have their hands full to keep the Spaniard quiet.

Like Chennaiyin, Goa have also mostly stuck with the same set of players. The notable absentee is another Spaniard Manuel Lanzarote, who shifted base to Kolkata. With both teams evenly matched and knowing each other fairly well, fans can expect an entertaining duel on Saturday.