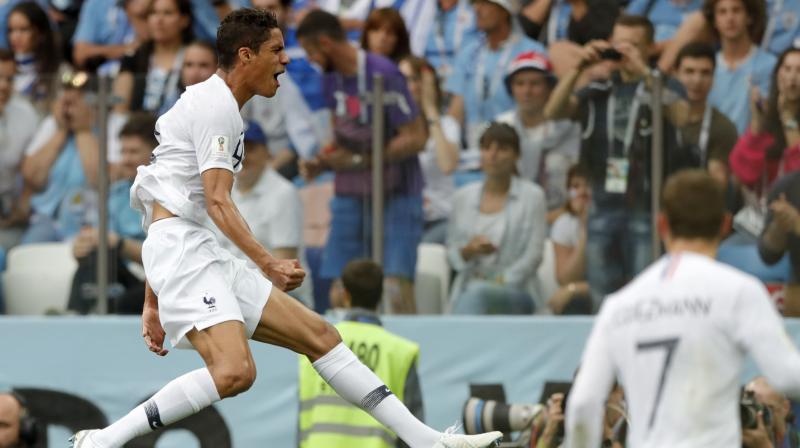 Nizhny Novgorod: Goals from Raphael Varane and Antoine Griezmann took France to the World Cup semifinals after their 2-0 win over Uruguay on Friday.

Earlier, the first half looked set for a goalless draw, but Varane produced a spectacular header to put Les Blues in front.

In the 61st minute, it was a long range shot from Atletico Madrid star Antoine Griezmann which doubled the lead, and all but ensured their place in the last four.

However, the match was not at all short of drama as the players of both the teams were engaged in an argument after Uruguay’s Cristian Rodriguez seemed to have fouled French teenage sensation Kylian Mbappe. In the end, both of them were given yellow cards.

Uruguay were without Edinson Cavani for this match, after he suffered a calf injury during the team’s last-16 clash against Portugal. However, it was a memorable night for France, as they remained on course for their first title since 1998.

90': Five minutes have been added in injury time.

88': Substitition made by France, as Mbappe goes off and in comes Ousmane Dembele.

76': France's Oliver Giroud has an unsuccesfull attempt on goal.

61': GOAAAAAAAL! Antoine Griezmann scores from a long range as the Uruguayan goalkeeper fails to make the save. France are 2-0 up, and is this the goal that wiull send Les Blues to semifinal.

59': Maximiliano Gomez (Uruguay) comes in for Cristhian Stuani. Also to come in is Christian Rodriguez in place of Rodrigo Bentancur

56': Rodrigo Bentancur's (Uruguay) shot goes off target, as the ball ends up wide behind the goal.

45 (Second half): The second half is underway!

39': Rodrigo Bentancur receives a yellow card. He will be suspended from playing for Uruguay should they advance.

5': Uruguay defenders show their skills once again, as they deny an attempt by France's Lucas Hernandez.

The lineups have been announced ahead of the Uruguay-France World Cup quarterfinal clash.

The major news from the Uruguay camp is the absence of Edinson Cavani from the team. He will not take any part in the match after suffering a calf injury in the round of 16 clash against Portugal.

Here is the detailed lineup:

It will be a clash of familiar faces when Uruguay and France clash in the FIFA World Cup quarterfinal here on Friday, as the superstars of  the Spanish La Liga will take part.

While Barcelona’s Luis Suarez will be the marquee player for Uruguay, Antoine Griezmann and Kylian Mbappe will lead French forward attack.

Uruguay have been a better defensive side than compared to France, having conceded just one goal to France’s tally of three. Incidentally, the goals conceded by both the teams have come in their round of 16 fixtures.

A win for either of the sides will mean that they will face either Brazil or Belgium in the semifinals.

The main worry for the South American side will be the form of Edinson Cavani, who has been sidelined with a calf injury.

In terms of head-to-head meetings in the World Cup, Uruguay have won once whereas two matches have been drawn.