India surge to 101 in FIFA rankings, best in past two decades

This is India's best ever FIFA ranking since May 1996 when India were also ranked 101. 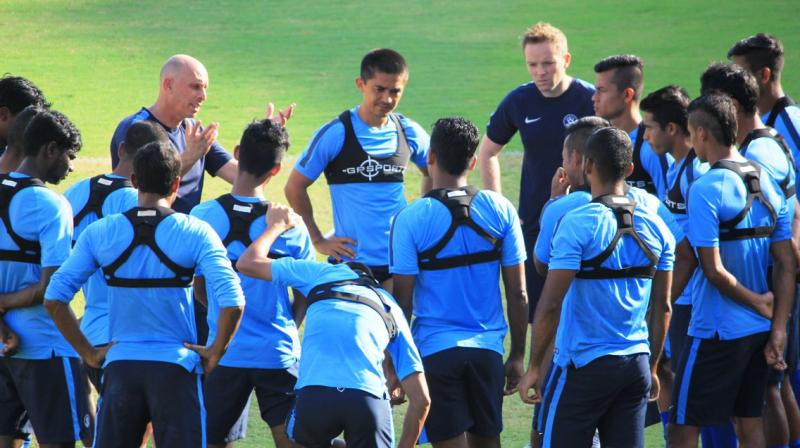 India's highest FIFA ranking achieved so far has been 94 which was attained in February 1996. (Photo: AIFF)

New Delhi: India on Thursday made an encouraging progress in the latest Federation Internationale de Football Association (FIFA) rankings as they climbed up by 31 places to the 101st spot, its best ever in over two decades.

This is India's best ever FIFA ranking since May 1996 when India were also ranked 101.The ranking of 101 elevated India to 11th ranked team in Asia, thus, inching closer towards realizing larger dreams.

The last couple of years have been extremely encouraging for Indian Football, wherein the National Team has had 11 victories in 13 matches (including an un-official match against Bhutan) scoring a total of 31 goals.

These wins also include some historic results -- 1-0 victory over Myanmar in the AFC Asian Cup qualifiers - the first ever win in Myanmar in over 64 years, and India's first ever win in an away encounter in over a decade when they beat Cambodia 3-2 in an International Friendly. The 4-1 win at home for India last year against Puerto Rico was also commendable.

National Coach Stephen Constantine said, "It has been a difficult road. Bringing in new blood and creating competition for places in the Team has been a process, and I'm pleased we are moving in the right direction."

"It's been a total Team effort. Unless Patel (AIFF President Praful Patel) and Das (AIFF General Secretary Mr. Kushal Das) allowed me to do the things and the manner I wanted it to be done, this won't have been possible ever," he stressed. "I also need to thank the support staff for their commitment for the team."

The Indian National Football Team, governed by the All India Football Federation were ranked 171 when Constantine took over as National Coach for the second time in February 2015 and slipped further to 173 in March 2015 in the FIFA ladder even before Constantine could have his first game in-charge against Nepal, which India eventually won 2-0 on aggregate.

Speaking on the achievement AIFF President Praful Patel said, "This is a great achievement and a fruitful reward for the hard work displayed by the team and the support staff on a regular basis. We at AIFF look forward to support the team and the coach in their endeavors to ensure sustained growth of Indian Football."

Kushal Das, General Secretary AIFF, congratulated the team saying: "The AIFF is committed to provide the best of exposure and facilities for the National Team in the form of arranging International Friendlies and preparatory Camps. We are delighted to achieve this milestone and hope to display the same character in our coming matches."

Post achieving the new ranking, India will play Lebanon in their first International Friendly at home on June 7, 2017 before taking on Kyrgyzstan at home on June 13 in their next AFC Asian Cup qualifier match.