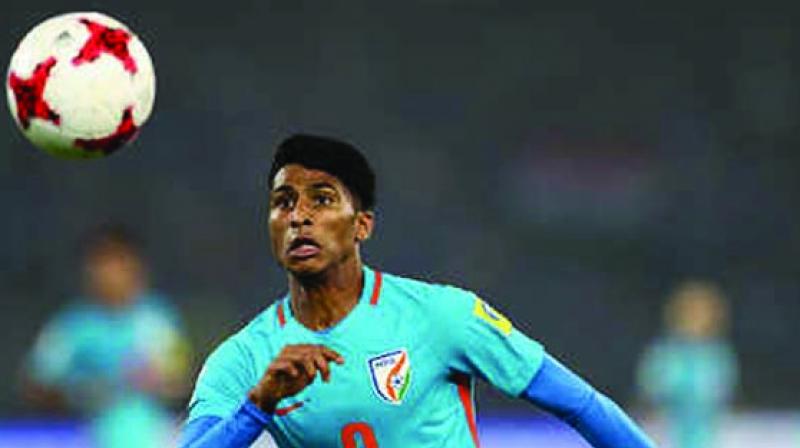 Having impressed in the Fifa Under-17 World Cup, Jamshedpur FC forward Aniket Jadhav is set to take his next big step — a three-month training stint at English Championship football club Blackburn Rovers.

The Kolhapur-based footballer will become the first Indian professional player to train in England when he joins the Blackburn Rovers Academy at Brockhall village, Lancashire.

“For someone coming from a small place in Kolhapur, it’s a dream come true for me,” Jadhav, who played in all the three matches for hosts India at the Under-17 World Cup, told PTI before leaving for Lancashire.

“I’m looking forward to this stint. The World Cup was a big experience and this is equally big and it keeps me on track with the mission when I left home as a nine-year-old kid,” the left-footed striker said.

Having started his football journey under Jaideep Angiwal of Krida Prabodhini school in Pune, the striker was picked by Pune FC where he joined the Under-15 side before progressing to the Under-17s. He was spotted by Nicolai Adam during an U-17 World Cup trial in Mumbai and since then he has been a constant member of the youth side. “I would like to thank Blackburn Rovers FC for believing in me and my ability, and inviting me to train at their world class academy.”

“Our Academy at Blackburn Rovers is one of the finest Category 1 Academy in the UK. This training stint will definitely help Aniket to develop technically as a player, which will in turn contribute to the improvement of his performances on the pitch.

“We want to support young talented footballers in the best way possible to help improve the Indian national team’s performances and Fifa ranking on the world stage,” Rao said.

Mukul Choudari of Jamshedpur FC also hailed Jadhav’s achievement. “We are very happy for Aniket. In fact, very rarely do Indian football players get such an opportunity and if they get it at this age, it is just fantastic, as this will only help him grow and enhance his skills further. It is going to be a win-win for everybody. As Jamshedpur FC, we congratulate Aniket for his talent and the opportunity that he’s got, which we are sure he will make the best of and come back as a much better player and make us proud.”