A first-half brace by Subash (39th, 45th minutes) helped Neroca outplay a young Indian Arrows side for the majority of the game. 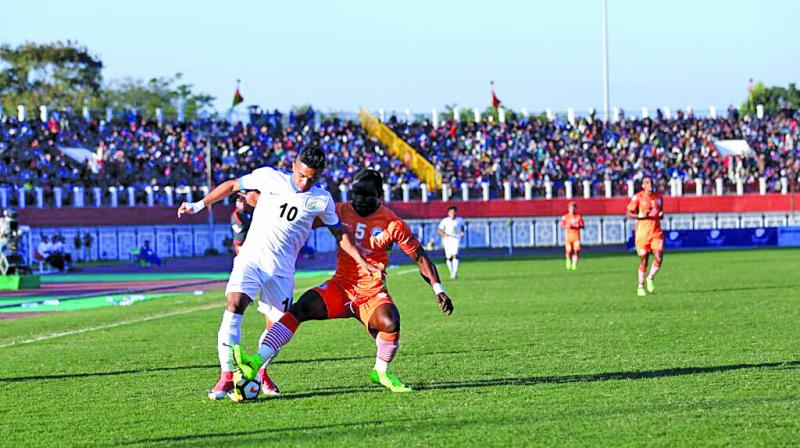 Action from the I-League match between Neroca FC and Indian Arrows in Imphal on Friday.

Imphal: Singam Subash Singh scored a brace to help Neroca FC register a 2-1 win over Indian Arrows and move up to the second position in the Hero I-League, here on Friday.

A first-half brace by Subash (39th, 45th minutes) helped Neroca outplay a young Indian Arrows side for the majority of the game.

Birthday boy Abhijit Sarkar (89th) scored a late consolation goal for the Arrows but it couldn’t deter the Gift Raikhan-coached team from bagging all three points at the Khuman Lampak Main Stadium.

Young Prabshukhan Singh Gill continued to stand in between the posts for the Arrows. Up front, Rahim Ali was deployed centrally and had support from Nongdamba Naorem and Rahul Kannoly Praveen on the flanks.

Nigerian striker Felix Chidi lead the line for the home side, with Akhlidin Israilov in the attacking midfielder position. Seasoned striker Subash Singh started the game on the left wing.

Felix Chidi was at the forefront of most of Neroca’s forays forward. The Nigerian striker, at the half-hour mark, attempted an audacious overhead kick on Yumnam Singh’s cross from the right. He failed to connect properly and Prabshukhan heaved a sigh of relief.

Neroca’s efforts paid off in the 39th minute. Akhlidin Israilov released a well-weighted through-ball into the path of Subash who chipped Prabshukhan with aplomb.

Subash doubled his tally at the stroke of half-time with another confident finish and this time, it was Felix Chidi who turned provider.

Chidi split the Arrows defence and the Manipur-born forward slotted the ball into the net to end the half with a two-goal lead for Neroca.

Luis Norton replaced Stalin with Naorem at the break. The change failed to influence proceedings as Neroca started the second half from where they left off at the break.

Lajong, Chennai play out draw
In Shillong, Shillong Lajong and Chennai City FC played out a goalless draw. Lajong who had the upper hand in both the halves with some dominating football but failed to find the back of the net.

Ivory Coast striker Abdoulaye Koffi had the first chance of the game in the third minute mark when Alen’s through ball fell at his feet and he launched his shot, but the ball went straight into the hands of the Chennai City keeper.