Vardy, the league’s top scorer, smashed home from the penalty spot in the 55th minute to net his 14th goal of the season. 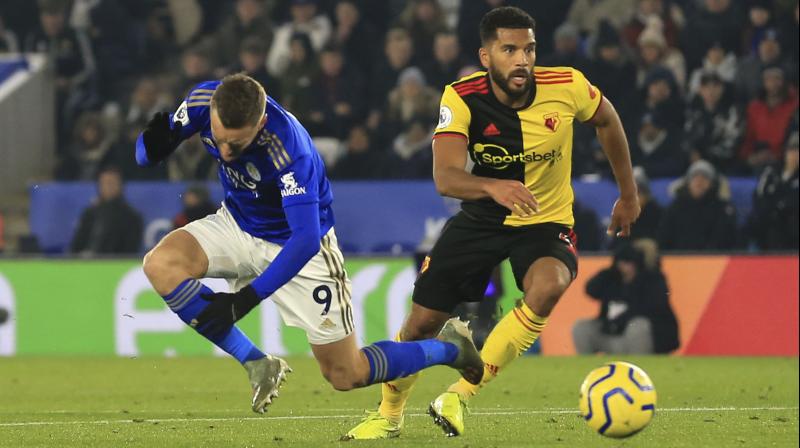 Leicester City forward Jamie Vardy struck for the seventh Premier League game in a row to help his rampant side to a 2-0 home win over basement club Watford on Wednesday, a seventh consecutive league victory that leaves them second in the table. (Photo:AP)

LEICESTER: Leicester City forward Jamie Vardy struck for the seventh Premier League game in a row to help his rampant side to a 2-0 home win over basement club Watford on Wednesday, a seventh consecutive league victory that leaves them second in the table.

Vardy, the league’s top scorer, smashed home from the penalty spot in the 55th minute to net his 14th goal of the season while midfielder James Maddison sealed the points with a strike deep in stoppage time.

Vardy had seen a penalty appeal turned down earlier in the game which instead earned him a yellow card for simulation but his side were soon awarded a spot kick when Watford’s Adam Mesina was penalised for striking Jonny Evans in the face.

Brendan Rodgers’s side are second in the standings on 35 points after 15 games, eight behind league leaders Liverpool and three ahead of champions Manchester City in third.

Leicester are in better form at the moment than at any point during their fairytale 2015/16 Premier League title-winning campaign and this victory equalled their top-flight record for consecutive wins, set in March 1963.

“We had to be patient this evening and worked very hard for that but I thought we deserved it,” Rodgers told reporters.

“It was a real team effort and to get seven wins on the spin in the Premier League is a great achievement. The team is developing and proving they have a winning mentality and mindset.”

Watford were playing their first game under caretaker coach Hayden Mullins after Quique Sanchez Flores was sacked following their 2-1 defeat by Southampton and showed plenty of fighting spirit as Leicester had to sweat to continue their winning run.

Winger Harvey Barnes was the hosts’ biggest threat and had several opportunities, including a chance to double the lead when he raced towards an incisive pass from Vardy but he was thwarted from close range by a brave block from Mesina.

Watford stay rooted to the bottom on eight points although Mullins was pleased to see his side push one of the top teams in the league all the way.

“I think up until the penalty we were in the game and even after it we were still in the game. We have come away from home to a team that has done really, really well and put a performance in.

“What I saw tonight was a side in us that came away from home and showed good levels of fitness, good intelligence on the field, put in a great performance and took it right to the wire,” he said.

“The boys have responded fantastically well, I’m so proud of what they did tonight. There were loads of positives.”