Leicester beat bottom club Watford 2-0 as they equalled a club record winning streak dating back to 1963. 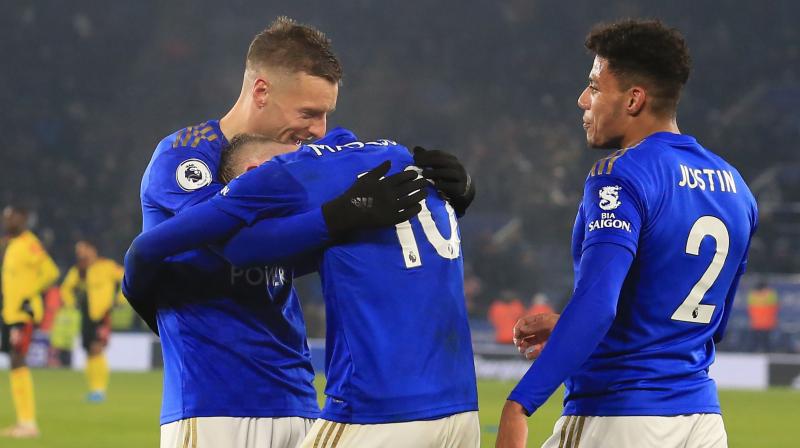 London: Liverpool’s bandwagon rolled on as they crushed Merseyside rivals Everton 5-2 at Anfield but Leicester City’s pursuit continued with a seventh successive Premier League victory to stay eight points behind on Wednesday.

Even with strikers Mo Salah and Roberto Firmino warming the bench, Juergen Klopp’s side had far too much firepower with Divock Origi scoring twice as Liverpool set a new club record of 32 league games undefeated.

While a first title for 30 years is beckoning Liverpool, pressure is piling up on Everton boss Marco Silva as his side dropped into the relegation zone, below Southampton who beat fellow strugglers Norwich City 2-1.

Jose Mourinho’s return to Old Trafford was not a happy one as Manchester United striker Marcus Rashford’s double earned his side a 2-1 victory over Tottenham Hotspur.

Leicester beat bottom club Watford 2-0 as they equalled a club record winning streak dating back to 1963 — Jamie Vardy and James Maddison scoring after the break to lift Brendan Rodgers’s side three points above champions Manchester City.

“Seven wins on the spin in the Premier League is a great achievement, we have a winning mentality,” Rodgers said. “We fight and work and see where it takes us.”

Chelsea manager Frank Lampard got the better of former team mate John Terry, assistant manager at Aston Villa, as his side shrugged off back-to-back league defeats with a 2-1 victory to consolidate fourth spot.

Wolverhampton Wanderers are now unbeaten in 10 league games — their best run in the top flight for 40 years — as they cruised to a 2-0 victory over West Ham United.

With Adam Lallana also given a start as Klopp rotated his squad at the start of a hectic month, Liverpool underlined their depth as they blew Everton away in the highest-scoring Mersey derby since 1933.

A mesmerising attacking display saw them net four goals before halftime with Origi and Xherdan Shaqiri scoring to make the most of rare starts. Sadio Mane was also on target although Everton played their part with Michael Keane and Richarlison keeping them in the contest.

A calmer second half brought only a late goal for Georginio Wijnaldum as Liverpool moved to 43 points from 15 games, eight ahead of Leicester and 11 clear of champions Manchester City.

“The players coming in were fantastic, it’s good to see, we will need everyone in this long season,” Liverpool defender Virgil van Dijk said.

“We have to use everyone and they all stepped up.”

Mourinho, sacked a year ago by Manchester United, returned to the north west in good heart after his first three games for Tottenham all brought victories while his United successor Ole Gunnar Solskjaer was under pressure after the Reds’ worst start to a season since 1988.

United produced the kind of vibrant display that has been a rarity this season and Rashford was superb. He opened the scoring early and tucked away a penalty in the second half after Dele Alli had equalised for Tottenham.

It was a dominant display by United who moved above Tottenham into sixth spot with 21 points from 15 games.

“It was the best performance Marcus Rashford has had under me,” Solskjaer said of the young England striker. “It’s like he was back on the playground.”

Mourinho, given a friendly welcome, said his side had started too slowly.

“We need to win more duels, we need to start the game with more intensity,” the Portuguese said. “We need to make the opponent feel what United made us feel.”