The legendary midfielder who won the coveted individual honour in 1990, feels the Croatian midfield metronome thoroughly deserved it. 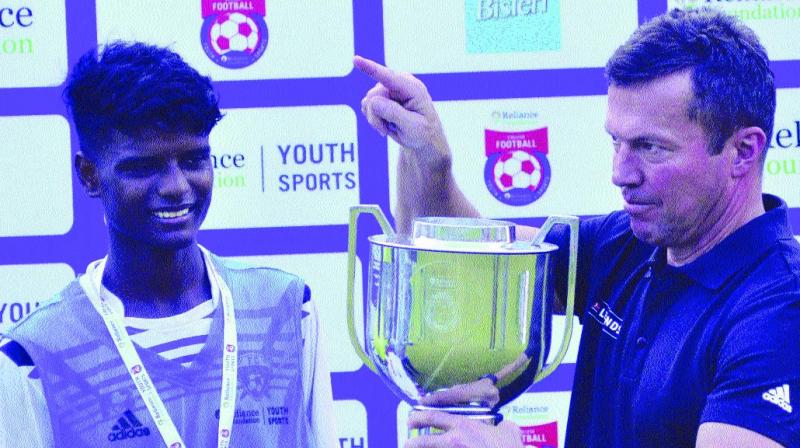 German World Cup-winning captain Lothar Matthaus speaks to a player who took part in the Kochi City Football Final in Kochi on Tuesday. The legendary midfielder's visit to the country is part of Bundesliga Legends Tour.

The legendary midfielder who won the coveted individual honour in 1990, the same year in which he captained Germany to World Cup triumph, feels the Croatian midfield metronome thoroughly deserved it.

“Luka had a great season with Real Madrid and he played great at the world cup as the captain of Croatia,” Matthaus said here Tuesday.

“After 10 years of Messi and Ronaldo it is another best player in the world. I had the same honour to win this 27 years ago. But without good teammates and good results as a team you cannot win a title like this. Luka had a good team at Real and Croatia. He is not only a good footballer but a nice guy.”

Matthaus, who is visiting India as part of a ‘Bundesliga Legends Tour’, believes the poor start made by German champions Bayern Munich in the ongoing Bundesliga season and the plight of their national team at the world cup is down to their reluctance to make necessary changes.

“Bayern Munich and Germany were missing something in the last six months — that is change. The world is changing generally and the same in football.

“At the world cup Joachim Loew kept the same players who won four years ago. Bayern Munich was thinking five months ago to trust the players who won the last six championships in Germany, they didn’t make any changes in the summer and bought in just two German based players — Serge Gnabry and (Leon) Goretzka. This was probably the wrong decision. But sometimes you have to make the cut,” he said.