The city is one of the six Indian cities hosting the Fifa Under-17 World Cup. 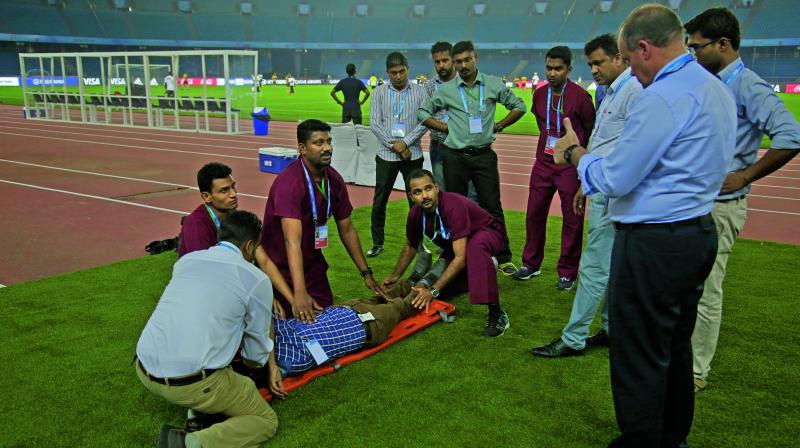 Paramedics undergo a mock drill to evacuate injured at Jawaharlal Nehru Stadium, one of the venues of FIFA U-17 World Cup in New Delhi on Wednesday. (Photo: AP)

New Delhi: With Delhi hosting some matches for Fifa Under-17 World Cup at Jawaharlal Nehru (JLN) Stadium, commuters travelling through the south Delhi areas may have to face traffic jams and restrictions over the next fortnight.

The city is one of the six Indian cities hosting the Fifa Under-17 World Cup. The matches in Delhi will be held on October 6, 9, 12 and 16.

“We will enforce restrictions on vehicle movement around the stadium. Motorists are advised to avoid those routes from 2 pm on those four days,” said Garima Bhatnagar, joint commissioner of police (traffic).

According to the advisory issued by Delhi traffic police, the movement of spectators to JLN Sta-dium will have no parking facility in the vicinity of the stadium. The spectators coming for the matches are advised to take public transport to  reach the venue.

Spectators getting down at JLN Metro Station and Jangpura Metro Station can walk up to the stadium. Those coming by their personal vehicles are advised to use car pool facility so that there is less congestion on the roads, Ms Bhatnagar said.

Those availing personal transport can use the ‘general parking’ made available for Fifa matches at Bharion Mandir. They can avail the shuttle services of DTC buses to reach the stadium, she said. .

Some of the roads likely to be affected are BP Marg, JLN Marg from JLN stadium red light to DAVP T-Point and CGO Road from CGO Mod to Pragati Vihar hostel red light among others.