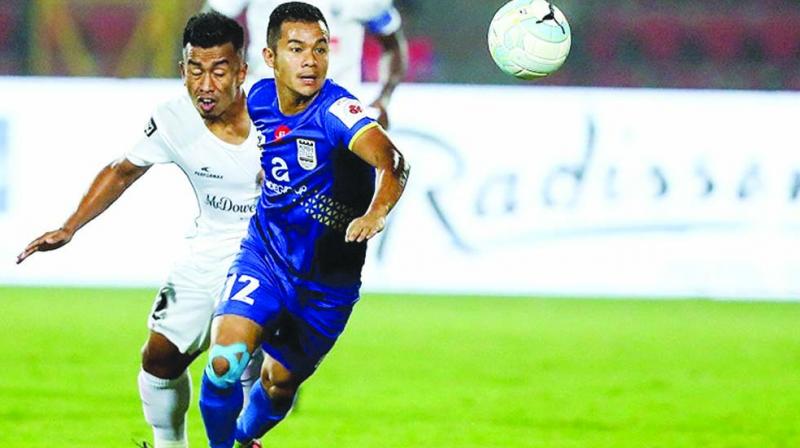 Mumbai City FC released experienced winger Sanju Pradhan after serving the club for two seasons. Pradhan was among seven players retained last season by the Islanders. But he wasn’t a regular in the side during Indian Super League’s fifth season, and has  now completed signing with former I-League champions Minerva Punjab FC.

“The club would like to thank Sanju for his commitment and his contribution to the club and wish him luck for the future!” Mumbai City said in a statement.

Sikkim born Pradhan started his career with then Mumbai based I-League club Air India in 2006 when he was scouted by reputed coach Bimal Ghosh. He got his major break two years later with East Bengal, where he played for five seasons and made 72 appearances. He played a season more for the Red and Golds on loan from ISL club NorthEast United and joined the Kolkata giant’s centenary celebrations recently. He played for many ISL and I-League clubs in between in short stints before settling in Mumbai City.

Even though he was a regular for the Mumbai City FC in 2017-18, he was benched quite often last season. The 29-year-old will hope to get more playing time with his new team, Minerva who won the I-League in 2017-18 season but finished ninth during the 2018-19 season. Their AFC Cup was not great either, they were eliminated in the group stages itself.

Now, Pradhan will look to guide the youngsters and do well for the team under new head coach Chun Yan Law. He has traveled extensively, playing for four ISL clubs and Minerva will be his sixth I-League club.

The Islanders under Jorge Costa have released many experienced players like Pradhan and Lucian Goian this season. However, they have retained their last season’s top scorer Modou Sougou and skipper Paulo Machado. The Senegalese striker Sougou was in sublime goal scoring form last season and was inspirational during the Islanders nine-match unbeaten streak. However, he lost steam towards the end of season and the Islanders eventually lost to FC Goa in the two-leg semi-finals. Machado has been the play-maker in the midfield and has scored few crucial goals as well.

Meanwhile, Mumbai City which has been previously awarded for its grassroots program, announced that we will be launching our first ever center of the Mumbai City Football Schools in Bandra on August 19 to enable footballers “playing football, the Islanders way!”