United have secured Maguire on a six-year contract with an option for a further 12-month extension. 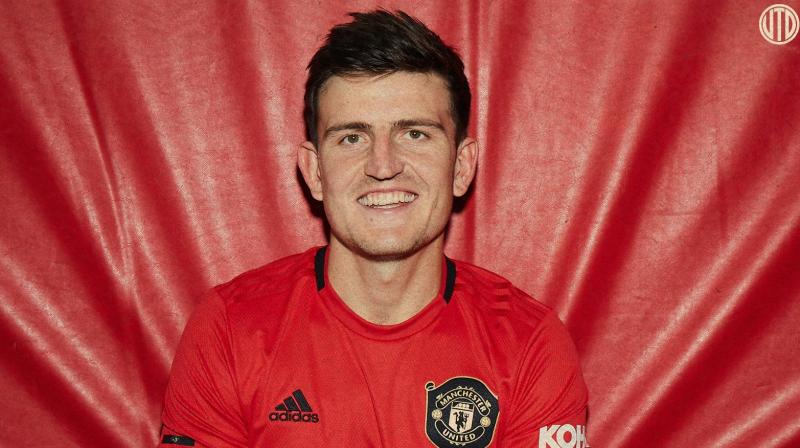 Maguire started his career at Sheffield United before making the leap into the Premier League with Hull in 2014. (Photo: Manchester United/Twitter)

London: Manchester United signed Harry Maguire from Leicester on Monday for a reported 80 million pounds fee that makes the England centre-back the world's most expensive defender.

United have secured Maguire on a six-year contract with an option for a further 12-month extension.

The 75 million pounds Liverpool paid for Virgil van Dijk in 2018 was the previous record fee for a defender.

It is also a record fee between Premier League clubs, surpassing Van Dijk's move to Anfield from Southampton and Romelu Lukaku's switch from Everton to Manchester United.

"I am delighted to have signed for this great club. I have thoroughly enjoyed my time at Leicester and would like to thank everyone at the club. However, when Manchester United come knocking on your door, it is an incredible opportunity," Maguire told United's website.

"From my conversations with the manager, I am excited about the vision and plans he has for the team. It's clear to see that Ole is building a team to win trophies. I am now looking forward to meeting my new team-mates and getting the season started."

Maguire, 26, could make his debut in his new club's Premier League opener at home to Chelsea on Sunday and United manager Ole Gunnar Solskjaer is confident he will live up to his hefty price tag.

"Harry is one of the best centre-backs in the game today and I am delighted we have secured his signature," he said.

"He is a great reader of the game and has a strong presence on the pitch, with the ability to remain calm under pressure - coupled with his composure on the ball and a huge presence in both boxes - I can see he will fit well into this group both on and off the pitch.

"He has a great personality and is a fantastic addition to the club."

Manchester City had been interested in Maguire, but Pepe Guardiola admitted on Sunday that the champions couldn't afford his huge fee.

Maguire, 26, shot to prominence for his performances at last year's World Cup as England reached the semi-finals for the first time since 1990.

United were interested in his signature last summer, but baulked at Leicester's asking price.

A year on and with the heart of their defence brutally exposed in finishing sixth in the Premier League last season to miss out on Champions League qualification, the Red Devils finally paid the fee the Foxes' demanded.

Solskjaer had made strengthening central defence a priority, with that need only becoming more acute when Eric Bailly suffered a knee injury during the pre-season tour of China which is expected to keep him out for at least four months.
Maguire's arrival also continues the trend of United targeting young British talent rather than big-name foreign imports.

Maguire started his career at Sheffield United before making the leap into the Premier League with Hull in 2014.

After impressing even as the Tigers were relegated two years ago, he joined Leicester in a 17 million pounds deal.

His England debut followed in October 2017 and he emerged as one of the unlikely stars of the World Cup, where he featured in all of the Three Lions' seven games and scored in the quarter-final victory over Sweden.

That signified a meteoric rise for Maguire who just two years previously had travelled as a fan to support England at Euro 2016.

Nicknamed "slab head" by former Leicester teammate Jamie Vardy for his physical prowess in the air, Maguire has also impressed with his ability to play out from the back.

However, City were less in need to break the bank for the 26-year-old after winning the first ever domestic treble of trophies in English football history.

By contrast, United need to shore up a defence that conceded 54 goals in the Premier League last season and are counting on Maguire's presence to cut the massive gap to rivals City and European champions Liverpool.