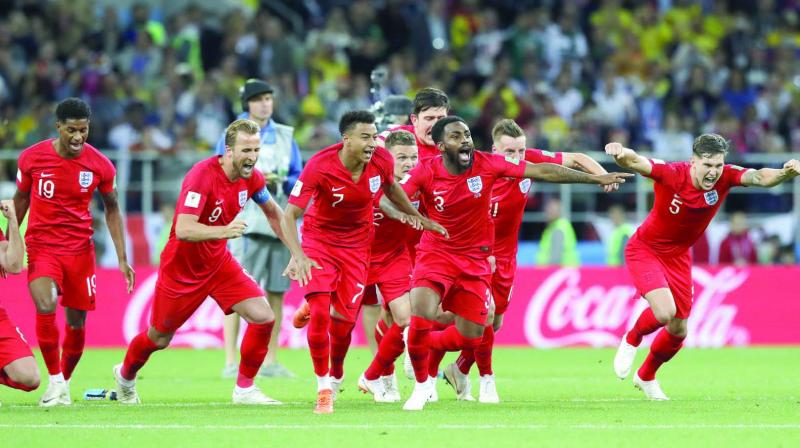 English players celebrate after beating Colombia on penalties at the Spartak Stadium in Moscow. (Photo: AP)

Moscow: England have entered the quarter-finals of the World Cup after beating Colombia 4-3 on penalties. Yes, you have read it right. The Three Lions have actually done it. Sea water might become drinkable and US President Trump might stop tweeting after England finally banished their demons from 12 yards for their first shootout victory in World Cup history.

The win on penalties after the match had ended 1-1 in open play must have been so surreal for the English fans at the Spartak Stadium here on Tuesday that they might have needed confirmation from the person sitting next. So pathetic had been England’s record. They had lost six tie-breakers in major tournaments, three apiece at the World Cup and Euro. A win over Spain at Euro 1996 had been their sole shootout solace until the Colombia result.

It was only fitting that the scrappy Last-16 match was decided by penalties. The first half was dire, as neither team could carve out a clear chance. There was a lot of running but most of it was futile. Colombia, who had never beaten England in five meetings, badly missed their majestic midfielder James Rodriguez who sat out with a calf injury.

England had been slightly less mediocre than their South American opponents, as fans all over the world came to terms with yet another disappointment after the utterly unwatchable Sweden-Switzerland contest earlier in the day. Maybe the ridiculous had to follow the sublime Brazil vs Mexico and Belgium vs Japan matches on Monday.

England went ahead early in the second half through Harry Kane’s spot kick. Centre-back Davinson Sanchez bundled Kane down after playing kabaddi with the English captain and it was the second penalty he had conceded in the tournament. Kane, very much a German for his confidence from the spot, made no mistake as the Tottenham Hotspur forward easily beat Arsenal goalkeeper David Ospina in the mini north-London derby. It was his sixth goal of the tournament and third from the spot. Kane has now equalled Gary Lineker’s English record of six goals in a World Cup in three matches here.

The goal made the game more frenetic, if not more enjoyable. Right-winger Juan Cuadrado wasted Colombia’s best chance of the evening by blazing a shot over from close range. Just when it seemed England had set up a quarterfinal date with Sweden, the equaliser arrived deep in added time.

Colombian substitute Mateus Uribe unleashed a cracker from 35 yards and England goalkeeper Jordan Pickford sprang to his left to tip it wide. Defender Yerry Mina buried the resultant corner to send the raucous Colombians fans into raptures. Even the presence of Kieran Trippier at the far post couldn’t stop the ball from going in. It was Mina’s third headed goal in Russia. Danny Rose’s fizzing shot across the goal was the only notable action in extra time as both teams knew the shootout was inevitable.

Ospina saved Jordan Henderson’s attempt to put Colombia 3-2 ahead but Uribe crashed his shot on to the bar to fritter away the advantage. Following Trippier’s confident conversion, Pickford saved Carlos Bacca’s penalty brilliantly to take England closer to the next round. The weight of a nation’s expectations was on substitute Eric Dier’s right foot and he delivered to write a new chapter in English football.