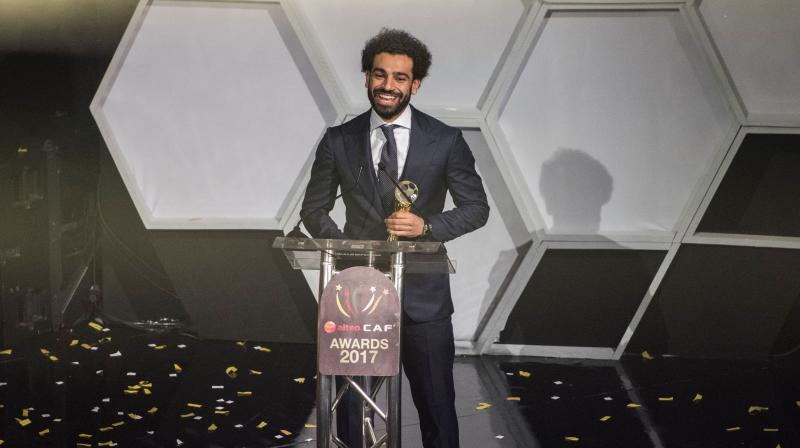 Mohamed Salah was the joint top-scorer in the final round of qualifiers as Egypt reached the World Cup for the first time since 1990. (Photo:AP)

Accra, Ghana: Mohamed Salah won African Player of the Year on Thursday, a reward for success on all fronts in 2017 for the Egypt forward after he inspired his country to a long-awaited World Cup place and had a phenomenal start to his career at Liverpool.

Salah won ahead of Liverpool teammate Sadio Mane of Senegal and Borussia Dortmund and Gabon striker Pierre-Emerick Aubameyang, the other finalists at the Confederation of African Football awards ceremony in Accra, Ghana.

The 25-year-old Salah had a memorable year, first as part of the Egypt team that made the African Cup of Nations final in February. Salah was then joint top-scorer in the final round of qualifiers as Egypt reached the World Cup for the first time since 1990.

He's had a stunning first half of the season at Liverpool with 17 goals in 21 league games and 23 goals in 29 games in all competitions, justifying Liverpool's decision to break the club's transfer record and pay $46.8 million to buy him from Roma in the summer.

Although Egypt lost in the African Cup final to Cameroon at the beginning of the year, the team returned to the tournament after seven years without qualifying and made it all the way to the final. Salah was a pivotal part of the revival.

He scored five goals in six games in the decisive qualifying round as Egypt sealed its place at the World Cup in Russia, ending almost three decades of near-misses and misery for fans. Salah scored both goals, including the injury-time winner, in the 2-1 win over Republic of Congo in October that sealed Egypt's place at the World Cup.

"It was very difficult to explain that moment to qualify to the World Cup after 28 years," he said at the awards ceremony in Ghana. "And to have a great season with the clubs, with Roma and Liverpool.

"This award is a big award for me ... it's a special moment for me in my career."

Mane finished second this time after a third-place finish last year. Aubameyang was third. He won African Player of the Year in 2014 and has been one of the three finalists for the last four years.

The award is traditionally voted for by the head coaches or technical directors of all Africa's national teams. This is the first year CAF allowed captains of those teams to also vote for the continent's best player, it said.

Salah's victory capped a clean sweep of the three main African football awards for Egypt. Egypt won team of the year and its manager, Hector Cuper, Africa's coach of the year.