Dutch striker Mark Sifneos scored the equaliser in the 73rd minute after Marcelinho had fired Pune into the lead in the 33rd. 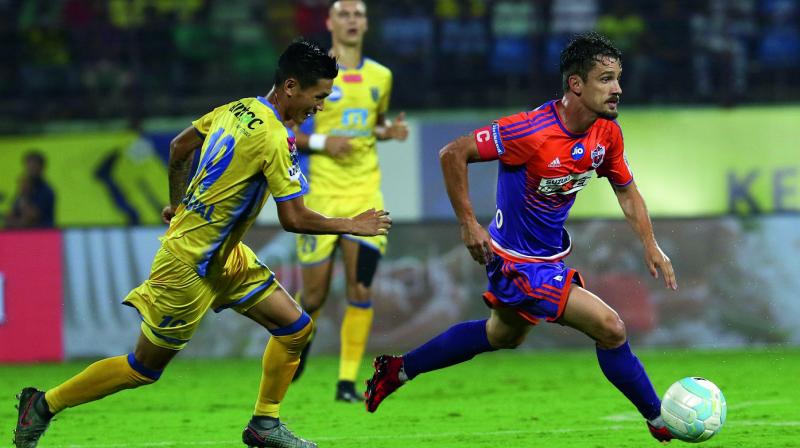 Pune FC’s Marcelinho (right) in action against Kerala Blasters in their ISL-4 match in Kochi on Thursday. The match ended 1-1.

Kochi: New coach David James began his second innings at Kerala Blasters on a decent note, playing out a 1-1 draw against Pune City in their Indian Super League match here on Thursday.

Dutch striker Mark Sifneos scored the equaliser in the 73rd minute after Marcelinho had fired Pune into the lead in the 33rd.

Kerala’s first season hero James had made a purposeful start to his second spell here while a free-scoring Pune who had convincingly won their last two matches, were finally halted by the unlikeliest of oppositions.

It was classic game of two halves; the first in which Kerala were in utter disarray, lacking hunger or verve to match Pune’s tenacity.

Then came a half of pure joy that seemed to wipe out any fragment of indecision from Kerala’s game as they barged out like a bunch of savages, ready to feast upon anything that stood in their path to freedom.

Jamshedpur look to bounce back
A tactical battle is expected to unfold when Jamshedpur FC host Mumbai City FC on Friday.

Mumbai have conceded seven, five of them away from home, scoring 11 in the process.

They are fifth on the table with 13 points from eight matches, a rung above JFC (nine from seven).