Zidane won everything from the Champions League to the World Cup as one of the greatest players of his generation. 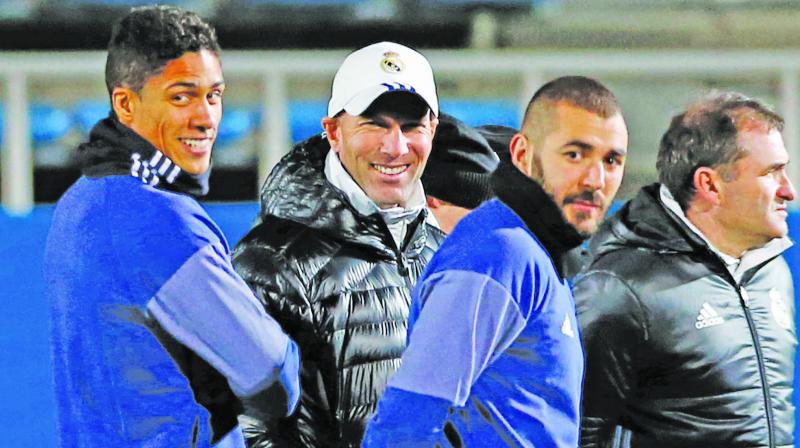 Madrid: The relentless demands for success at Real Madrid have cost many high-profile and heavily experienced coaches their jobs, but Zinedine Zidane has made the move into senior management look serene as he celebrates a year in charge as a European and world champion.

Madrid was a club with a very different feel 12 months ago when Zidane was promoted from his post as coach of Real’s youth team Castilla in a salvage operation from club president Florentino Perez to rescue a hitherto disastrous campaign as Rafael Benitez lasted just seven months in the Santiago Bernabeu hot seat.

Zidane won everything from the Champions League to the World Cup as one of the greatest players of his generation. Yet, even by those standards, his rapid rise as a coach has been breathtaking. The Frenchman has won more trophies (three) than he has suffered defeats (two) in his first 53 games in charge.

After adding the Club World Cup to the Champions League and European Super Cup to end 2016, Zidane celebrates his first anniversary in charge at home to Sevilla on Thursday (1.45 am) in the Copa del Rey last 16 on a club record 37-game unbeaten run. Despite being very much the president’s man, Zidane hasn’t been bowed by Perez’s often perceived desire for the starting line-up to be determined by the number of shirts sold by his “Galactico” signings.

Zidane’s own personal playing style was defined by his grace on the ball, but he has prioritised hard work. More unheralded names such as Brazilian defensive midfielder Casemiro and Spanish winger Lucas Vazquez have earned their places in the side ahead of crowd favourites and media darlings like James Rodriguez and Isco.

Winning over ego-driven Real
Zidane’s status as a former world great, and ability to still pull off a spectacular touch in  training, means he has also won the hearts and minds of Real’s ego-driven dressing room which many of his predecessors, particularly Benitez failed to cope with.

Yet, such are the demands at the Bernabeu, no coach is ever handed a long grace period should results turn and Real face an even tougher test to maintain their success in 2017. Should Real reach the Copa del Rey semifinals, they face 21 games in the next 11 weeks.

The target is for Zidane to deliver Real’s most successful ever season by becoming the first side to retain the Champions League in 27 years and knock Barcelona off their perch as La Liga’s dominant side in the past decade. However, Zidane’s managerial mettle will be fully tested in trying to fend off a post Club World Cup slump caused by fatigue that Real and Barca have suffered in the past two seasons.

Zidane has passed every test he has faced with flying colours in his first 12 months in charge. 2017 will determine whether there is more to his magic touch than beginner’s luck.