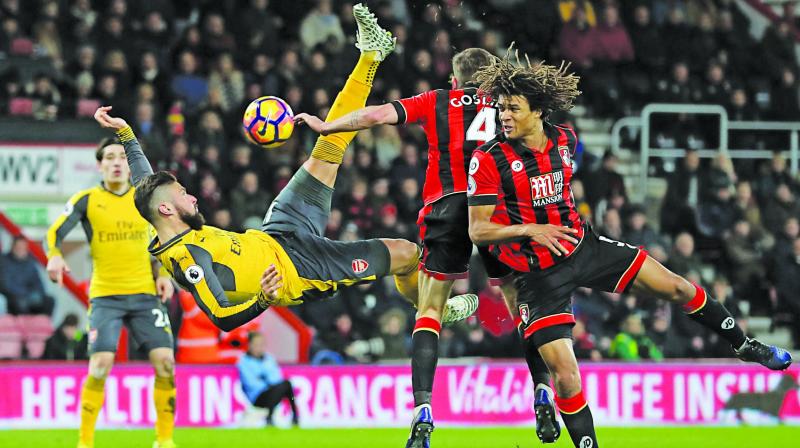 Arsenal staged a sensational fightback from three goals down as Olivier Giroud’s last-gasp equaliser rescued a draw at Bournemouth.

London: Arsenal staged a sensational fightback from three goals down as Olivier Giroud’s last-gasp equaliser rescued a draw at Bournemouth, while Swansea welcomed new boss Paul Clement with a crucial 2-1 win at Crystal Palace on Tuesday.

Arsene Wenger’s side were facing their first defeat — and a major setback to their Premier League title hopes — to Bournemouth after goals from Charlie Daniels, Callum Wilson and Ryan Fraser stunned the Gunners at Dean Court. But Arsenal scored three times in the last 20 minutes as Alexis Sanchez and Lucas Perez netted before Bournemouth captain Simon Francis was sent off, setting the stage for Giroud’s headed equaliser in the second minute of stoppage time.

The Gunners’ gritty 3-3 draw left them in fourth place, eight points behind leaders Chelsea. “We refused to lose the game,” Wenger said. At Selhurst Park, Clement saw Swansea climb off the bottom of the table just hours after his appointment and in the day’s other match Stoke won 2-0 against a Watford side on the slide.

Wenger had bemoaned the fixture schedule that had Arsenal back in action just 48 hours after their victory against Palace and the Frenchman wore a furious expression as his sluggish side were torn apart in the first half. Clement, who had been working as Bayern Munich’s assistant coach, is Swansea’s third boss this season following the sackings of Bob Bradley and Francesco Guidolin.

Having been appointed earlier in the day, Clement was at Selhurst Park to watch his new team, although Curtis picked the starting line-up, and the presence of their new boss energised Swansea. Their pressure was rewarded in the 42nd minute when Gylfi Sigurdsson’s free-kick was headed in by Alfie Mawson for his first Premier League goal.

Sam Allardyce, taking charge of his first home match as Palace boss, trudged off with boos ringing in his ears at half-time. Palace drew level in the 83rd minute when Wilfried Zaha met a Martin Kelly cross in midair with a superb scissor kick from 15 yards.

But Clement, who had been in the dug-out since half-time, was celebrating five minutes later when Angel Rangel smashed the winner to lift Swansea to 19th place, one point behind fourth-bottom Palace. Stoke moved away from the relegation zone with a 2-0 win against Watford.

Ryan Shawcross put Stoke ahead on the stroke of half-time with a confident finish from Charlie Adam’s corner. Adam was the provider again when Stoke increased their lead, this time sending over a cross that Peter Crouch converted in the 49th minute.