Since he took over in February, Leicester’s form has been nothing short of spectacular, with 16 wins and four draws from their 25 games. 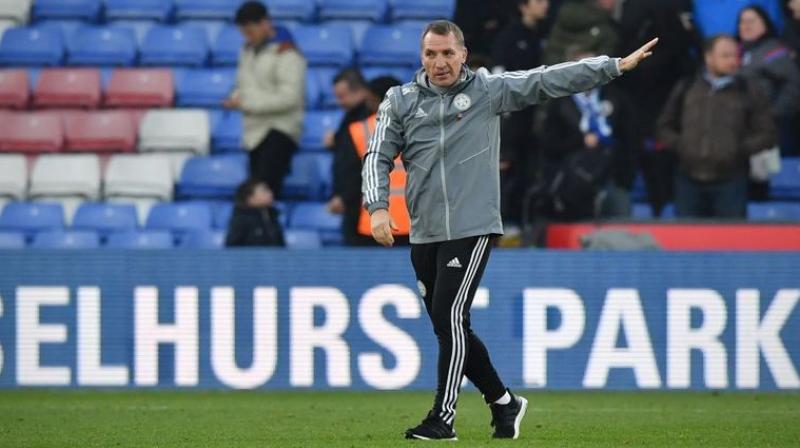 Leicester City underlined why they are considered credible title contenders with a sixth successive Premier League win on Sunday but post-match talk was dominated by whether or not manager Brendan Rodgers would stick around to lead the charge. (Photo:AFP)

Leicester City underlined why they are considered credible title contenders with a sixth successive Premier League win on Sunday but post-match talk was dominated by whether or not manager Brendan Rodgers would stick around to lead the charge.

Since he took over in February, Leicester’s form has been nothing short of spectacular, with 16 wins and four draws from their 25 league games under the 46-year-old former Liverpool and Celtic boss who currently can do no wrong.

Only Liverpool’s Juergen Klopp and Manchester City’s Pep Guardiola can boast that kind of return.

With his stock on the rise, Rodgers was inevitably asked about the vacant Arsenal job after Leicester’s last-gasp 2-1 victory over Everton — a result that put his side three points clear of champions City and eight behind Liverpool.

While Rodgers insisted he was “excited” to be at Leicester, he did not exactly shut down talk of a move to Arsenal, who sacked Unai Emery on Friday, admitting there was a “release clause” in his contract if one of the big boys came knocking.

“There probably is in most manager’s contracts,” Rodgers said. “It’s all hypothetical, all these types of situations.

“I think for me in this moment we’ve had a brilliant win today. My focus is very much with Leicester.

“I’ve been very fortunate in my career to work with some brilliant clubs and some great institutions. This was an ambition to come here and help the club arrive in the top six.

“I made a change eight or nine months ago... I’ve been so happy to come into here to work with the players. I feel we still have a lot of work to do.”

Not even under Claudio Ranieri in their remarkable 2015-16 title run did Leicester win six league games in a row. This time, however, they are not just chiselling out results, they are playing with a flair that Ranieri’s side often lacked.

Against Everton, who ended Leicester’s run of four league clean sheets when Richarlison headed them in front, they have to graft. Rodgers’s decision to unleash striker Kelechi Iheanacho from the bench proved a masterstroke though.

First the Nigerian set up Jamie Vardy’s equaliser, then in stoppage time he burst forward to seal the victory.

On current form the Foxes are peerless and do not look like a side who will come crashing back to earth anytime soon. Rodgers, who took Liverpool to the brink of the title in 2013-14, praised his side’s mentality.

“I thought we deserved it. It was difficult in the first half, they sat in but we tried to stay positive and play our offensive game,” he said.

“To come from behind as well demonstrates the quality and mindset of this team to keep going. In any good team you have to have that. The best teams have spirit. This is a team that is so strong together. We found a way with quality and determination.”