The stalemate favored Zidane's Madrid, which left Camp Nou with its six-point advantage atop the table intact with Barcelona second. 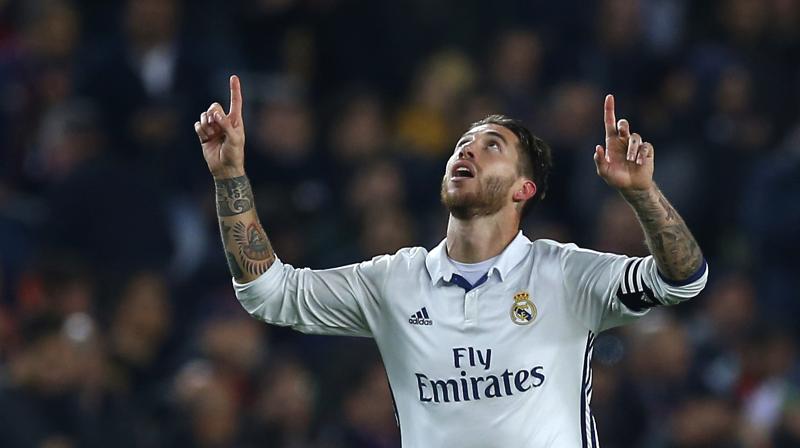 Madrid, which also extended its unbeaten streak to 33 consecutive matches, is searching for its first domestic league title since 2012. (Photo: AP)

Barcelona: Sergio Ramos stepped up once more for Real Madrid in a major match, scoring in the 90th minute to secure a 1-1 draw at Barcelona's Camp Nou Stadium on Saturday.

"(Ramos) always shows up for games like this one," Real Madrid coach Zinedine Zidane said. "He never gives up. That is what Sergio brings."

The Spain defender charged in to head Luka Modric's free kick past goalkeeper Marc-Andre ter Stegen, who got a hand on the ball but couldn't keep it out.

Luis Suarez's header from a free kick by Neymar had given Barcelona the lead in the 53rd, but Barcelona squandered the opportunity to finish off its fierce rival.

The stalemate favored Zidane's Madrid, which left Camp Nou with its six-point advantage atop the table intact with Barcelona second.

"Our effort paid off," Ramos said. "We were able to maintain the difference. We can't go crazy. There is still a long way to go, but we depend on ourselves."

Madrid, which also extended its unbeaten streak to 33 consecutive matches, is searching for its first domestic league title since 2012.

In his 12 seasons at Madrid, the 30-year-old Ramos has a habit of striking late in big games, including his headed goal to force added time in the 2014 Champions League final, which Madrid went on to win against Atletico Madrid. He also scored an equalizer - after 90 minutes were up - against Sevilla in this season's UEFA Super Cup, with Madrid again emerging the winner.

"What we have to highlight is the heart of this team. We believed until the end and got an important draw," Zidane said.

Ramos' goal on Saturday stunned Barcelona, which was on the cusp of reviving its title defense.

Instead, it has now drawn three rounds in a row and only won two of its last seven matches overall, a particularly poor run for a side boasting an attack of Lionel Messi, Neymar and Suarez.

Despite having Andres Iniesta cleared to play from a right-knee injury hours before the match, Barcelona coach Luis Enrique decided to keep faith in the same starting 11 that was thoroughly outplayed in last weekend's stumble at Real Sociedad. Andre Gomes started for Iniesta.

Even though Barcelona played better for stretches, its lack of finishing doomed it to another slip at home, where it has just three wins in seven league games this campaign.

Forward Lucas Vazquez, playing for the injured Gareth Bale, was behind Madrid's first threat when his fancy footwork opened space for a cross that Karim Benzema fired off a defender.

With Modric getting plenty of help to keep Messi from scoring for a sixth consecutive "clasico," the visitors ventured out for a goal attempt just before halftime through Cristiano Ronaldo.

Barcelona got the boost it needed after the restart, when Suarez muscled Vazquez out of the way and nodded in Neymar's cross that he swerved into the middle of the six-yard box.

Iniesta went on for Ivan Rakitic in the 60th for his first action since injuring a ligament in his right knee at Valencia on Oct. 22.

Neymar, who picked up a suspension with a fifth yellow card, impressed with a sudden change of foot to breeze past Dani Carvajal, only to blast his point-blank shot over the bar in the 68th.

Iniesta, Neymar and Messi then all added shots that could have sealed the win.

But Madrid pinned the hosts back in the final minutes and got the equalizer when Ramos arrived unchecked to meet Modric's service after Barcelona substitute Arda Turan had conceded the free kick by fouling Marcelo.

"It's a blow to all of us," Luis Enrique said. "We have to improve, above all at home. We are very far from where we need to be."

Before kickoff, both teams observed a minute of silence for victims of the plane crash in Colombia which included players from the Brazilian team Chapecoense.