The Islanders suffered a defeat at home owing to similar problems, just like last season. 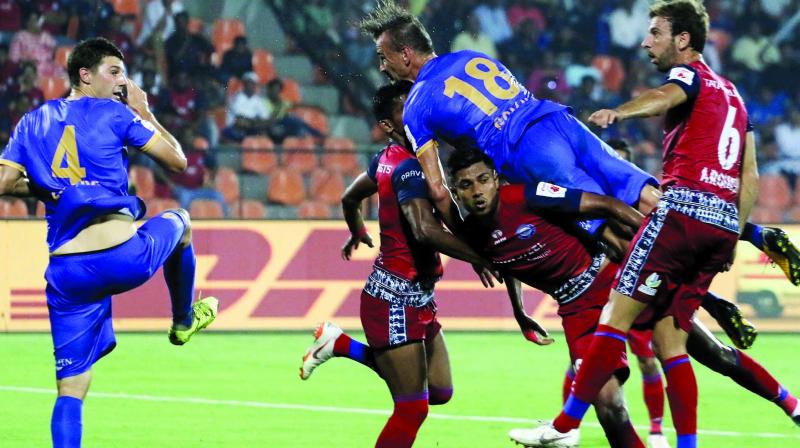 It was a flashback from last season, just with a different set of players this time.

A slick ball sent by Sanju Pradhan pierced the defence of Jamshedpur FC and met the feet of Mumbai City FC’s Rafael Bastos who only had the goalkeeper to beat. Most of the people were up on their feet to see the equaliser since the home team was trailing 0-1, but it was a déja vu. Bastos had a half-hearted attempt, which was saved by Jamshedpur’s second choice keeper, Subhashish Chowdhury. It was a flashback from last season, just with a different set of players this time.

However, it is too early to conclude anything about Jorge Costa’s Mumbai that lost 0-2 to Jamshedpur FC on Tuesday here. It was a confident team that reacted splendidly after conceding a goal in the first half an hour. In the second half, a switch of play to diagonal passes allowed Costa’s side to bypass the JFC midfield at times and create chances like the one for Bastos.

Before JFC substitute Pablo Morgado scored the second goal deep into the stoppage time of the second half, there were two instances when Mumbai managed to find the back of the net. Both times, it was ruled offside, which enraged the already flustered Mumbai fans who even started to curse the referee with a chant. Even though the referee does not rule any player offside, but Indians watch sports with a different emotion. It was the linesman who at both instances was correct with his decisions.

“We gained more confidence in the second half and we created a lot of chances to score. We scored two goals – offside or not, I don’t know, I didn’t see. We were better; we were very close to the goals. In two days, we will play again but it’s okay,” he added.

His team did performed  well in the second half and it was visible. They had more possession in the opponents half and the forwards were involved more. Modou Sougou, who was playing as the striker, tested the keeper on multiple occasions. The fact that the forwards couldn’t find the back of the net must concern Costa. It was something that haunted his predecessor Alexandre Guimaraes as well.

The Portuguese manager defends his players and applauds Chowdhury. “We had two very good one-on-one chances which were stopped by their goalkeeper. The most difficult is not to score; it is to arrive there. Then, it is the luck, it is the quality, and it is a lot of other things. Also, we are not playing alone. Their goalkeeper made some very good saves. We will try to be better next time,” he said.

The Islanders don’t have time to mourn over this loss, as there is an away fixture against Kerala Blasters waiting for them on Friday. One of the most passionate fans will be hosting Mumbai and it might not be as easy as this one.