Drop your egos, work together: Bhutia to Indian football stakeholders

Bhutia further said that ISL's diminishing popularity could be revived by the inclusion of Kolkata's Mohun Bagan and East Bengal. 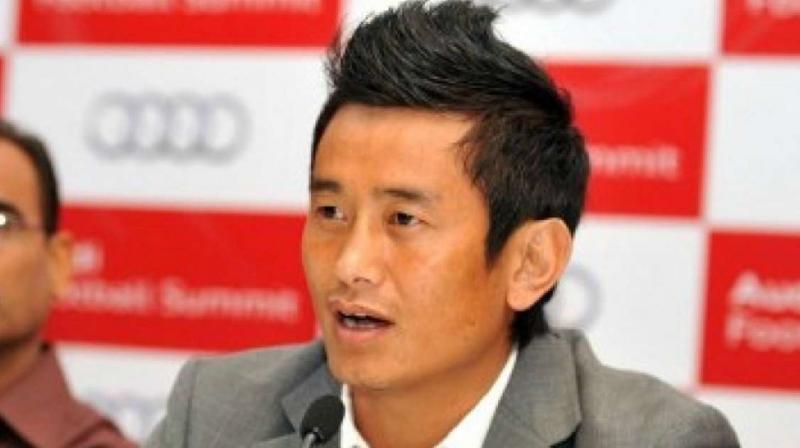 Kolkata: Former captain Baichung Bhutia Thursday said stakeholders of Indian football need to "drop their egos" and make a few sacrifices while deciding the structure of the country's domestic league, which remains an unresolved matter due to lack of consensus.

Up against the controversial move to accord top-tier status to the IMG Reliance-backed Indian Super League (ISL), I-League officials met the All India Football Federation president Praful Patel Wednesday.

But the New Delhi meet remained inconclusive as Patel said both the leagues would co-exist for two more years, a time frame by which the AIFF hopes to reach a solution.

Bhutia said the need is to set pride aside.

"I think the biggest challenge right now is to keep the egos down. It has to be give and take. Everything can't be the way you want. It has to be a bit of sacrifice for all the parties (I-League, ISL and AIFF), keeping your egos down, looking at the betterment of Indian football," Bhutia said at the Football Players Association of India's new building.

"Everybody right now is looking at their own clubs to survive, their own league to do well... Yes, there are different challenges in I-League and there are also pluses and minuses in it. We have got a same thing for the Federation and ISL as well."

"The structure of Indian football, sooner it gets settled, the better. Till the time you don't get your structure this is going to go on happening. Federation's biggest challenge with ISL and I-League is to get the structure right."

One of the biggest icons of Indian football further said that ISL's diminishing popularity could be revived by the inclusion of Kolkata's two heavyweights -- Mohun Bagan and East Bengal.

"Today if you play a Spanish League and if you do not play Barcelona or Real Madrid then the charm of the league no more exits. By bringing them into the top league will only add to the passion and the competition will be much better. I'm sure one day they will get in.

"ISL will definitely benefit with East Bengal and Mohun Bagan coming in. These clubs have a lot of history, they bring in fans to the stadium. The I-League name can be changed. What we need right now is a top league with the big clubs of East Bengal, Mohun Bagan and the ISL teams. They need to be more professional," he added.

Pointing out the decline in TV ratings, the 47-year-old said: "It's the data showing it... The fans in the stadium are coming down drastically. It's there in black and white. When it started it was the third highest watched league in the stadium. Now you need to try and do something different to revive it."

"Including Mohun Bagan and East Bengal could be one of the options. I feel by them coming in, it will add value to the league. For them to make revenue, they want the league to be longer. The sponsorship comes very less for a period of three-four months."

On the future of the I-League, he said: "You can have a premier league, then first division and second division. The names then can be changed as the I-League over the years has had many names like NFL in the past.

"What we need is a league with relegation and promotion. The number of teams in the top League has to increase beyond 10 teams," he said adding that the FIFA delegates have studied the structure.

"Now we should try and get into top 50. Ranking is important as you get easy qualifying rounds. People also follow you. When I was the technical committee chairman, our aim was to get into top-100 with Stephen (Constantine) and qualify to the Asia Cup, that's something we have achieved."

The former chairman of the technical committee further said the Shyam Thapa-led existing committee should be more vocal in terms of what their goal is.

"The need to be more transparent with their ideas and views. They have to be vocal and should not compromise."

Earlier on the auspicious occasion of Rath Yatra, the FPAI did a puja at their office premises and Bhutia, a former president of the players' body, said now they have a permanent address.

It, however, remains to be seen how the FPAI helps in resolving the transfer crisis for Jobby Justin who's involved in a tussle with his former club East Bengal.

Jobby has claimed from the very beginning that he had agreed to join ATK but the I-League runners up have maintained that the player had signed a pre-contract with the red and golds for two more years.

Terming it unfortunate, Bhutia said: "it does not give a good image and publicity to the game. I'm not trying to say who's right or wrong, but it's important for all the parties to be fair at the same time. That's the reason why FPAI is here."