Many people including yours truly hadn’t been bullish about Asian team’s chances in Russia. 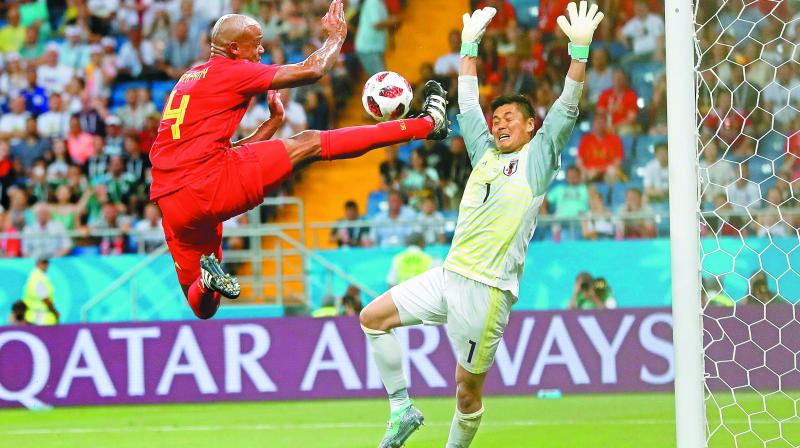 Belgium’s Vincent Kompany (left) in action against Japan goalkeeper Eiji Kawashima in their Round of 16 match at the Rostov Arena in Rostov-on-Don on Monday. (Photo: AP)

Moscow: Japan arrived at the World Cup with the fear of getting slaughtered but they are leaving Russia with their chests puffed. Japan may have lost to Belgium 2-3 after squandering a two-goal lead in the Last 16 at Rostov-on-Don on Monday, but their heroic performance was a victory for their spirit in particular and Asian football in general.

If ever a defeat tasted like success, it was Japan’s. After a couple of underwhelming World Cups, Asia roared again to prove that it's not merely making up the numbers in Russia. South Korea had ousted Germany with the upset of the tournament here and Japan nearly sent home a team, which many pundits believe have all the tools to be crowned champions.

Cynics who cavilled at Japan’s progression to the second round on account of their superior disciplinary record over Senegal had a fitting replay in the Blue Samurai’s splendid show on Monday. After adopting an ugly, safety-first approach in their final league match against Poland, the Japanese threw caution to the wind to rattle Belgium. They were 20 minutes away from a famous win. But there was nothing to complain about in the end as the Belgians won fair and square.

The match was a spectacle as both teams played positive, clean football. Japan didn’t sit back and play for a shootout like Russia had done against Spain; they went for Belgium’s neck. The Samurais almost killed off their highly-rated opponents with two sumptuous goals before paying the price for their generosity at the back. It was wonderful to watch Japan go forward because they did so with gay abandon.

A short stay beckoned Japan when they came to Russia. Expectations were low at home as well after long-term coach Vahid Halilhodzic was replaced by Akira Nishino just before the tournament. But the Japanese have demonstrated that they are masters at overcoming obstacles. They never say die in life as well as football.

Many people including yours truly hadn’t been bullish about Asian team’s chances in Russia. But Iran and Japan got the event to a splendid start for the world’s most populous continent with a win over Morocco and Colombia respectively. Iran were a kick away from the second round after they equalised against Portugal in their final league match only to be left ruing a missed opportunity at the death. After being thrashed by Russia in the opener, Saudi Arabia, the fourth Asian team in the fray, rebounded spectacularly to post a 2-1 win over Egypt.

The overall performance of Asia wasn’t bad, although feel-good stories alone wouldn’t be enough in the future. For example, only two Asian teams, South Korea in 2002 and North Korea in 1966, have survived the second round in the 88-year history of the World Cup. The record is abysmal for a continent that is home to more than half of the world’s population.