The Brazlian’s performance is tarnished by his tendency to overreact. 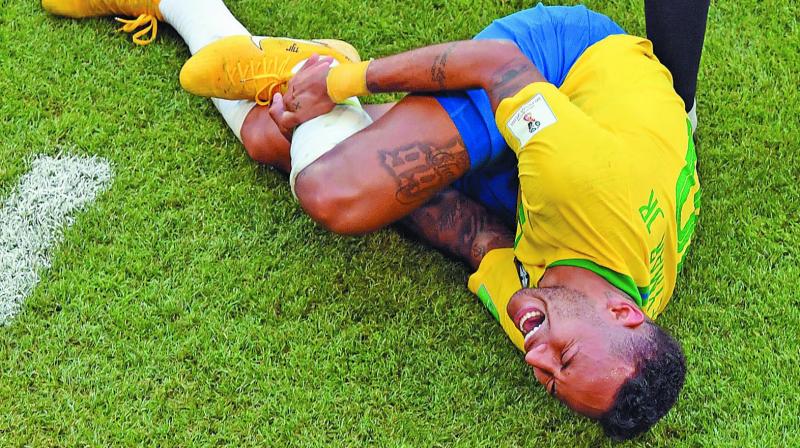 There is no need for a player of such outrageous talent to indulge in theatrics to garner attention.

Moscow: No contemporary football player has the ability to excite and exasperate fans in equal measure like Neymar. Some of the tricks he has pulled off at the World Cup here are captivating: the rainbow flick against Switzerland and the back heel that resulted in Brazil’s opener against Mexico. Even Lionel Messi and Cristiano Ronaldo can’t do everything Neymar does.

At the same time, the Brazilian superstar has also irritated his opponents and fans alike in Russia with petulant play-acting. There is no need for a player of such outrageous talent to indulge in theatrics to garner attention. Though the forward has already done enough here to prove the existence of gravity, his performance against Mexico on Monday took the cake.

He reacted to Mexican defender Miguel Layun’s inadvertent stamp on his ankle as if a bus had run over his leg. Such over-the-top reaction might have got Layun a red card in the pre-VAR days. It’s perplexing why Neymar had to resort to such cheap tactics to get a player sent off.

Mexico coach Juan Carlos Osorio was upset that the prolonged attention Neymar sought at the touchline affected his team’s momentum as they were chasing the game. “It’s a charade. It’s shameful that so much time could be lost for one player. This should be a game of men and not much clowning around,” he raged.

Although Neymar has brushed aside Osorio’s charges, the Mexican coach has a point. Only teams that give their all to overturn a deficit know it. Every second counts in football. It’s possible that Neymar was really hurt because Layun had stamped on the same foot that had been operated upon before the World Cup. But the Brazilian’s penchant for play-acting precedes him. Even if he is really hurt, few people would believe him. If there were a World Cup for the funniest meme, the top 10 might be on Neymar.

After the exit of Messi and Ronaldo, Neymar is the last superstar left in the World Cup. Already the most expensive player in the world, Neymar has reportedly invited another record bid from Real Madrid. Brazilians love him to bits because he plays without fear on the big stage, unlike his good friend Messi. His repertoire of skills is very much Brazilian. But even his compatriots don’t like his propensity to smell the grass at the drop of a hat because Brazilians don’t play football like that. Can you remember an episode of play-acting by Brazil’s Ronaldo?

Neymar’s supporters —there aren’t many to his antics — could point out how the forward was kneed out of the World Cup his country staged in 2014.

It is true that Neymar has been the most fouled player (23) at the World Cup here. In addition, he has topped the charts in shots on goal (12), assists for goal-scoring chances (16) and dribbles (40).

He is being fouled because he is the most important player for his team. It happens to every top player. Neymar has an opportunity to make the World Cup his own. And, the king should not aspire to become a court jester.