The comfortable victory from moved Chelsea fifth and level on points with Arsenal above them, also eased pressure on coach Maurizio Sarri. 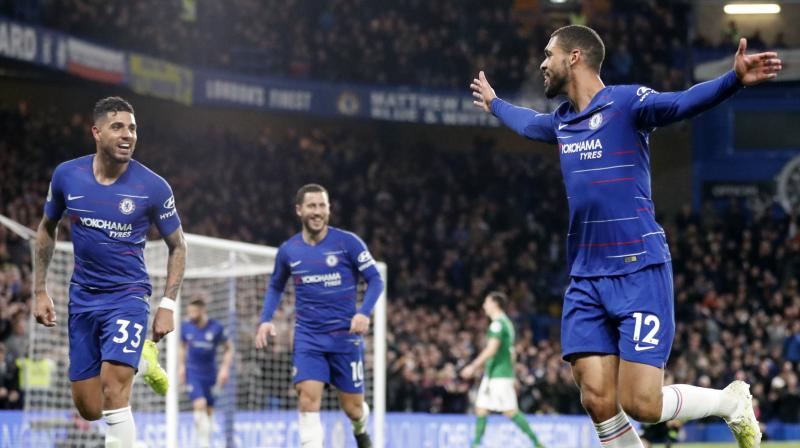 The 3-0 victory also boosted their chances of a top-four finish, along with a chance to secure a UCL spot. (Photo: AP)

Goals from Olivier Giroud, Eden Hazard and Ruben Loftus-Cheek and an impressive first Premier League start by Callum Hudson-Odoi earned Chelsea a 3-0 win over Brighton and Hove Albion on Wednesday, boosting their chances of a top-four finish.

The comfortable victory from the home side, which moved Chelsea fifth and level on points with Arsenal above them, also eased pressure on coach Maurizio Sarri after some fragile recent performances.

Local boy Hudson-Odoi, who last month made his first start for England but has struggled to feature for Chelsea, created the opener when he crossed for World Cup winner Giroud to score with a flick of the outside of his boot in the 38th minute.

Belgium’s Hazard made it 2-0 on the hour when he collected a pass from Loftus-Cheek and curled a shot from the edge of the box past Mat Ryan. Three minutes later, Hazard repaid the favour, feeding Loftus-Cheek to fire home.

The 18-year-old Hudson-Odoi, who has been courted by Bayern Munich and the object of keen interest at home and abroad, proved lively and influential throughout the match.

“Callum now is ready to play every match and also the most difficult matches because he has improved a lot throughout the season,” Sarri said.

“It’s impossible to be at the top when you are 18 so he can improve, he needs to improve and then he can become one of the best players in Europe.”

Sarri also singled out fellow Academy graduates Loftus-Cheek and Danish defender Andreas Christensen as players who are making their mark.

“They are at the moment very important players but the potential is there so in the future they can become top players. I think for this team the future can be good,” he said.

“Sometimes it is difficult to keep young players because when they are under 18 they can sign only for two years.”

Chelsea overtook Manchester United to sit fifth in the Premier League on 63 points, level with Arsenal who have a game in hand, and one point behind Tottenham Hotspur in the chase for places in next season’s Champions League.

Brighton, fighting to avoid being dragged into the relegation fight, remain 15th, five points above the drop zone.