urgen Klopp's men owe a huge debt to their Dutch defender, signed from Southampton 15 months ago for an eye-watering 75 million. 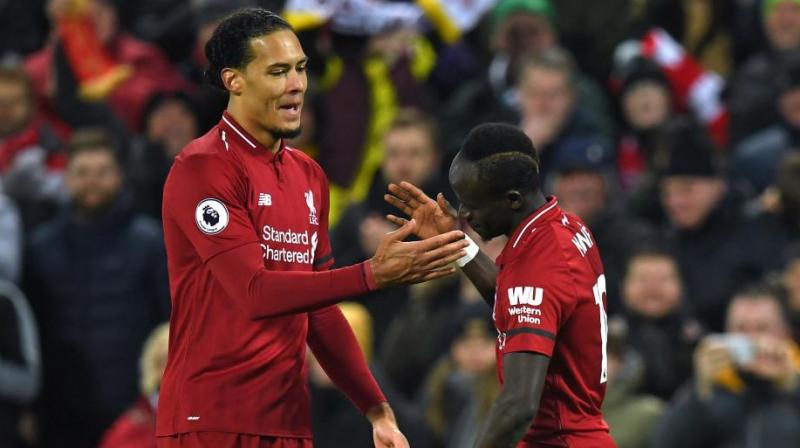 Liverpool's protracted bid to sign the defender from Southampton, which had been thwarted the previous summer, was met with disbelief by many as he became the most expensive defender in the history of the game. (Photo: AP / File)

Liverpool: Virgil van Dijk returns to his former club Southampton on Friday with a growing reputation as one of the most influential figures in the Premier League title race between his Liverpool side and Manchester City.

For all their attacking threat, Jurgen Klopp's men owe a huge debt to their Dutch defender, signed from Southampton 15 months ago for an eye-watering 75 million (USD 99 million) fee, the size of which raised eyebrows.

But now the investment looks one of the wisest in recent Premier League history, with one Van Dijk moment in particular, during the weekend win over Tottenham, being held up as an example of his peerless form.

With the game finely poised at 1-1 at Anfield on Sunday, Tottenham had a two-on-one break, featuring Moussa Sissoko and Son Heung-min against the Liverpool centre-half.

Van Dijk took the decision to leave Sissoko with the ball, forcing him into a shot that the nervous Tottenham man missed hopelessly, paving the way for Liverpool to snatch a dramatic last-gasp winner.

"Of course," said teammate Andy Robertson when asked if that one moment showcased Van Dijk's skills to their utmost.

"He made the right decision there. Look, it's getting to the point of the season where both teams wanted to win it. If it's maybe in the first month of the season, it probably sees out as a 1-1 draw.

"But these situations are going to happen. We're maybe going to get a wee bit exposed at the back but there's nobody better to deal with it. Luckily we got away with one there and they've not got away with it."

Robertson was not the only admirer following the Dutchman's role in that victory and, with every passing week, the case for Van Dijk to be named as the Premier League's player of the year is gaining momentum.

Liverpool's protracted bid to sign the defender from Southampton, which had been thwarted the previous summer, was met with disbelief by many as he became the most expensive defender in the history of the game.

But his displays last season, in helping Liverpool reach the Champions League final, answered many of the doubters and Van Dijk's form has, if anything, been even more impressive this season.

Manchester City's Raheem Sterling is another strong candidate for the end-of-season individual awards but Van Dijk has made a strong case and the only slight concern for Klopp after the Tottenham victory was the sight of his key defender using an ice pack on a muscle injury after the game.

However, concerns he could be a fitness doubt for the return to his old club were quickly dispelled when Liverpool showed footage of the 27-year-old taking part in a full training session on Wednesday.

"He's so important to us not only as a player but as a person. I couldn't say a bad word about him even if I wanted," said Klopp.

"Yes he has improved us and he has improved since he came here as well. He is a different player to when he was at Southampton. Champions League quarter-finals, semi-finals and final help you as a player."