Verratti opened the scoring for the Cup holders in the first half with his first PSG goal of the season. 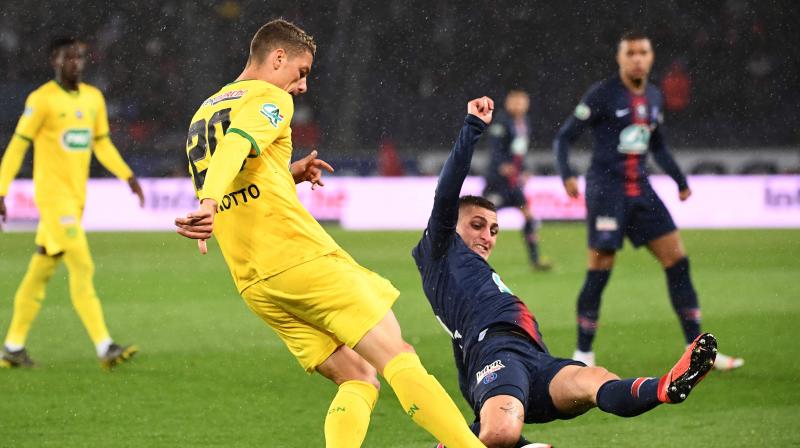 Kylian Mbappe scored a penalty and Daniel Alves found the net with a delicate lob to wrap up victory in the closing stages. (Photo: AFP)

Paris: Marco Verratti scored a rare goal for Paris St Germain as they beat Nantes 3-0 at home to reach the French Cup final on Wednesday, with a fifth consecutive title in their sights.

The midfielder, who also found the net for Italy last week, opened the scoring for the Cup holders in the first half with his first PSG goal of the season.

Kylian Mbappe scored a penalty and Daniel Alves found the net with a delicate lob to wrap up victory in the closing stages.

Mbappe was denied from the spot by Nantes keeper Ciprian Tatarusanu earlier in the match before the visitors were reduced to 10 men after Kalifa Coulibaly was sent off for a second yellow card in the 71st minute.

PSG, who lost Marquinhos to a muscle injury, will face Stade Rennais, who beat Olympique Lyonnais 3-2 on Tuesday, in the April 27 showdown at the Stade de France.

The Ligue 1 leaders have not conceded a single goal on their way to the final.

With Neymar watching from the stands, Verratti unleashed a low diagonal shot from outside the box on 29 minutes to put the home side ahead.

It was his second goal in eight days after he scored in Italy’s 6-0 victory over Liechtenstein in a Euro 2020 qualifier last Tuesday.

Mbappe beat Tatarusanu from the penalty spot after a Nicolas Pallois handball, but referee Francois Letexier had it retaken due to players encroaching into the box.

Tatarusanu blocked the second attempt, but he was powerless with Mbappe’s penalty in the 83rd minute after Alves was brought down by Diego Carlos.

Alves wrapped up an emphatic win when he lobbed Tatarusanu from the edge of the box two minutes into added time.

The sides will meet again at the Parc des Princes in Ligue 1 in two weeks.