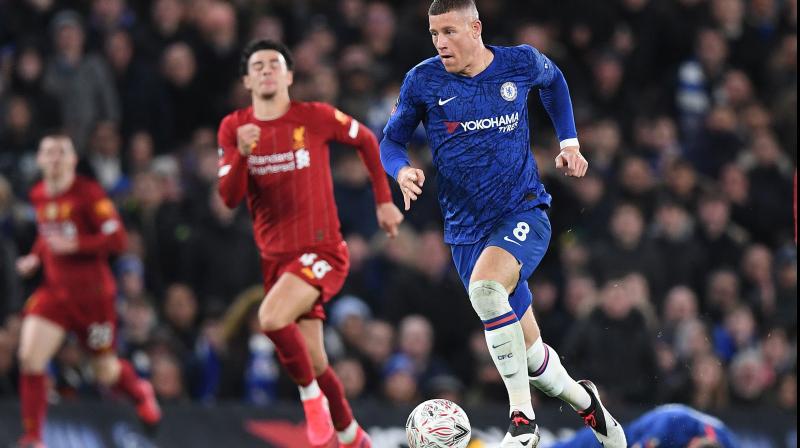 Chelea's Ross Barkley begins his run which culminates in a goal against Liverpool in FA Cup at Stamford Bridge, London, on Tuesday. AFP Photo

London: Liverpool was eliminated from the FA Cup on Tuesday in a 2-0 loss to Chelsea as a run of poor results continued for Jurgen Klopp's team. Willian opened the scoring thanks to a goalkeeping blunder from Adrian before Ross Barkley scored a solo goal for Chelsea's second.

In two weeks, Liverpool has gone from looking near unbeatable in all competitions to losing three of its last four games. First Atletico Madrid beat Liverpool 1-0 in the first leg of their Champions League last-16 meeting on Feb. 18, then Watford stunned the Reds 3-0 to end an unbeaten run in the Premier League that had lasted more than a year. And now Chelsea extended Liverpool's 14-year wait for an FA Cup title.

Willian's goal followed some uncharacteristically sloppy defending from Liverpool. Fabinho's fumbled clearance allowed Willian to shoot from the edge of the box. Adrian, starting in place of first-choice goalkeeper Alisson, seemed to have caught the ball before it bounced off his hands and into the net.

Back in Chelsea's lineup after being dropped for five games, goalkeeper Kepa Arrizabalaga showed his skills with a triple save to deny first Sadio Mane, then Divock Origi, then Curtis Jones.

In the 64th, Barkley collected the ball inside his own half then drove forward in between two defenders before scoring with a shot from outside the area.

It wasn't all good news for Chelsea, though. Willian and Mateo Kovacic both went off injured, joining a growing list of Chelsea players nursing problems, among them N'Golo Kante, Ruben Loftus-Cheek, Tammy Abraham and Christian Pulisic.

Also, Newcastle reached the quarterfinals for the first time since 2006 as two goals from Miguel Almiron proved just enough to see off West Bromwich Albion 3-2.

Sheffield United needed an extra-time goal from veteran striker Billy Sharp to beat Reading 2-1. David McGoldrick had scored his first goal for Sheffield this season to give his team the early lead, but Reading leveled with a George Puscas penalty just before halftime.