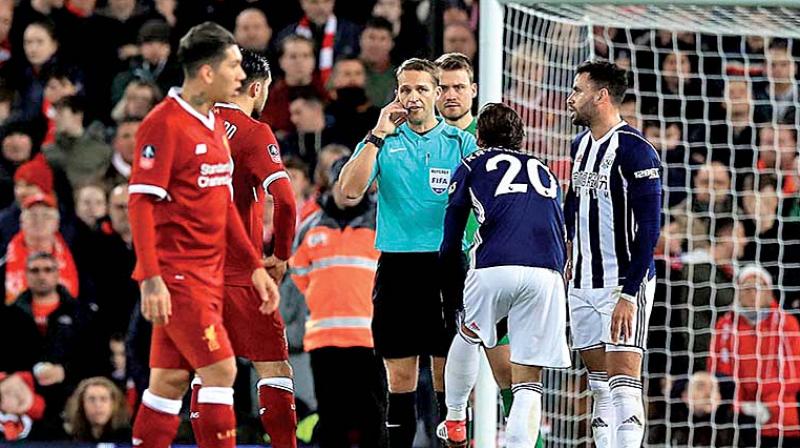 Craig Pawson disallows a West Brom goal after consulting with VAR, during a match with Liverpool. (Photo: AP)

The Video Assisted Referee (VAR) system, which has only recently been implemented in the Premier League, has come under fire for its inaccuracies. The system, quite similar to the third umpire method in cricket, has been blasted by footballers and fans alike for its inabilities to be crystal clear in its decisiveness. We speak to football experts and ask them their opinion on VAR in football, whether it’s even needed, how it can be better implemented and more.

‘VAR can make football even more beautiful’
Anil Kumar, Secretary, Kerala Football Association
Sometimes football is best left alone, with room to breathe. And many experts would have an opinion that the implementation of VAR would break the flow or beauty of it. But when you look at the game in the modern world, it has changed a lot with a lot of money at stake. It is true that there is a lot of commercialisation in the game. So when a club, franchise, or anyone puts a lot of money into the game, they don’t want to see a wrong decision by the referee affecting the end result.

VAR will help the referee to decide whether to give a penalty, spot a simulation or to have the accurate off-side call. But implementing this suddenly for the biggest event of all, FIFA World Cup, would be a risk. A better alternative is that they test this technology in a league for a while before implementing at the international stage. With minimum interference and maximum benefit Video Assistant Referee (VAR) can make football even more beautiful.

‘Use VAR only for goal line’
Steven Dias, Mumbai FC footballer
Personally, I don’t think it is needed. For a 90-minute game, it doesn’t suit the format to stop the game in between to watch a video, take a decision and then get back to playing. But if it were to be implemented at all, then it should only be used for the goal line. It should be used quite like how Frank Lampard’s goal was denied in the 2010 World Cup and the team was out of the tournament.

‘You’re trading the flow for consistent fairness’
Sunil Chhetri, Bengaluru FC captain
The VAR is a bit of a double-edged sword. The beauty of football has always been about the flow of the game. Throw VAR in the mix and you have stoppages. But then again, you’re trading the flow of the game for consistent fairness. That said, the technology has to be flawless, only then does it make sense. If you’re taking the aid of video, you cannot get a decision wrong. One wrong call at a key juncture in a game could end everything a team has been working for from the start of the season. Then again, the referee has just one look before he can make a decision. There has to be a middle ground.

‘It is important that authority lies only with the referee’
Henry Menezes, CEO, Western India Football Association
Football is a fast action game and any technology is welcome. But with VAR, it is important that the authority lies only with the referee and is used when he is in doubt. It should not be in the hands of the players.

Imagine a referee blowing the whistle 40 times in a 90-minute game because players want every kick to be examined. How can one expect the authority to be given to anyone? In such a case, the game will never progress.

‘Natural that teams will want a system that can minimise referee mistakes’
Raman Vijayan, former India player and ISL commentator
I believe the VAR is a must these days because a wrong decision has the potential to change the course of an important match. When the stakes are so much higher in the  English Premier League, it’s only natural for teams to want systems that can  minimise mistakes of a referee. I don’t mind losing four or five minutes every match to get the right decision. There is no need to restrict referrals, because unlike tennis, cricket and badminton, the call is the referee’s in football. Of course, there would be opposing voices from fans and experts alike, because the game hasn’t undergone major changes in nearly 130 years. But I’m sure people will get used to VAR as time goes along.

‘A welcome step for football in India’
Mohammad Shamsuddin, CEO, Sports Village Club
The Video Assisted Referee (VAR) system, will be a welcome step for football in India. Though it has come under fire for various inaccuracies, I think it is a nice initiative to encourage more youngsters towards football. In a nation like India, where everyone is more concerned about cricket than any other sports, VAR system will at least initiate a process. In order to improve the system, I think the training should be imparted to people on how to handle the system, like the third umpire method in cricket. The third umpire system has been handled by experts and has undergone changes, and so will VAR over the years.