When Manchester City won the title in 2017-18 it was felt their 100-point total, a new Premier League record. 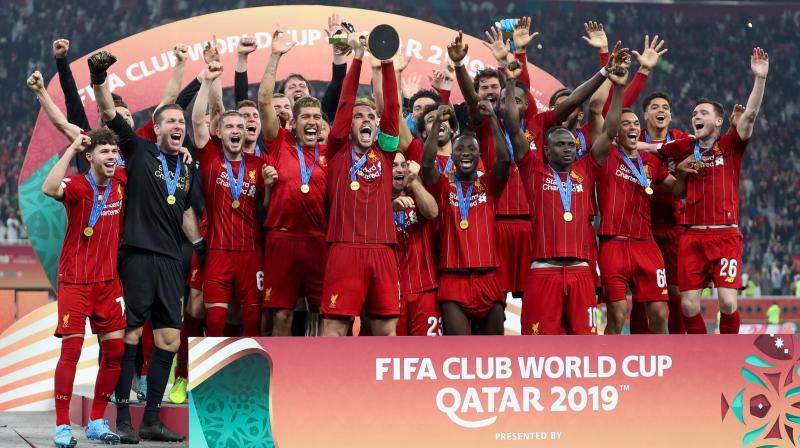 Liverpool are on course to shatter the Premier League’s record points haul and the way Juergen Klopp’s side are churning out wins it would now be a surprise if they failed to do so. (Photo:AFP)

LONDON: Liverpool are on course to shatter the Premier League’s record points haul and the way Juergen Klopp’s side are churning out wins it would now be a surprise if they failed to do so.

When Manchester City won the title in 2017-18 it was felt their 100-point total, a new Premier League record, would become a high-water mark to endure for many years.

City’s haul that year was five more than the previous Premier League record of 95 set by Chelsea under Jose Mourinho in 2014-15, although they needed almost as many last season when they topped the table with 98 to Liverpool’s 97.

Liverpool’s 2-0 win over Sheffield United on Thursday means they have 58 points from a possible 60 after 20 games — the tally Man City achieved at the same stage two years ago.

With 19 wins and a draw they are averaging 2.90 points per game, putting them on course for 110 from 38 games which would also be a record for Europe’s top five leagues.

Even with a couple of defeats or a few draws they would still would top City’s 2018 total.

Since losing to Manchester City exactly a year ago, Liverpool are unbeaten in the Premier League, taking 101 points from 37 games during that period.

Only two other teams have gone a year unbeaten in the Premier League — Arsenal’s so-called invincibles in 2003-04 (a run of 49 Premier League games) and Chelsea (40 matches) from October 2004 to November 2005.

Since that City defeat, Liverpool have won 32 of their 37 league matches, averaging 2.7 points per game.

They are 13 points clear of Leicester City having played a game less and those desperately seeking a chink in Liverpool’s armour appear to wasting their time.

They have scored in 29 successive league games and have netted 89 goals in their year-long unbeaten run.

Liverpool have won their 11 league games and have even stopped leaking goals, a theme earlier in the season when they went eight games without clean sheet. They have scored 12 goals without reply in their last five league matches.

Yet Klopp believes his side are still improving.

While a first English title since 1989-90 looks a formality, Liverpool still have a way to go to match other great runs in European football.

Arsenal’s 49-match streak is beatable this season but matching AC Milan’s remarkable 58-game run without a Serie A loss from 1991-1993 still looks a distant prospect.

To emulate that great Milan side would require Liverpool to go unbeaten in the Premier League until November. Even to break the British record looks a daunting task with Celtic’s 62-match unbeaten league run between 1915 and 1917 looking untouchable.