Four years after his last Ballon d'Or, Messi pulled clear of the five next to the name of Cristiano Ronaldo. 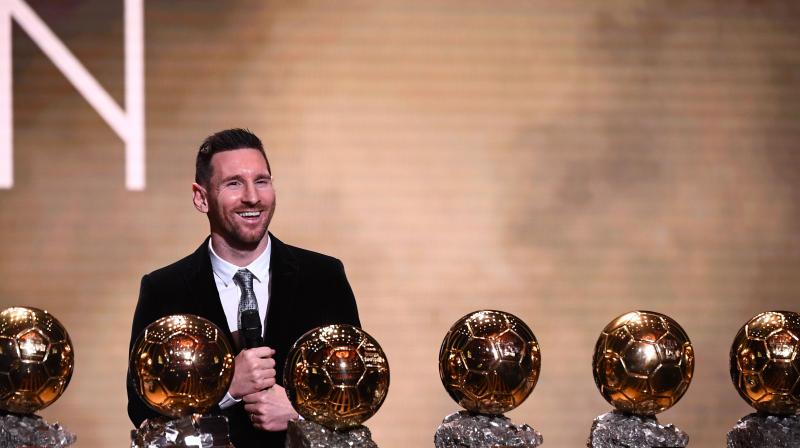 Lionel Messi won a record-breaking sixth Ballon d'Or on Monday after another sublime year for the Argentinian, whose familiar brilliance remained undimmed even through difficult times for club and country. (Photo:AFP)

Madrid: Lionel Messi won a record-breaking sixth Ballon d'Or on Monday after another sublime year for the Argentinian, whose familiar brilliance remained undimmed even through difficult times for club and country.

Despite Barcelona's collapse at the end of last season and Argentina losing to Brazil in the semi-finals of the Copa America, Messi's genius was ever-present in 2019, for which he now stands alone in the history of the game's most prestigious individual prize.

Four years after his last Ballon d'Or, Messi pulled clear of the five next to the name of Cristiano Ronaldo, and now owns twice as many as Johan Cruyff, Michel Platini and Marco van Basten.

In 54 appearances this year, Messi has managed an astonishing 46 goals and 17 assists while for Barca alone he hit 41 goals and 15 assists in 44 matches, which included seven doubles and three hat-tricks.

"It's like he is extra-terrestrial," said Barcelona coach Ernesto Valverde in March.

"Every time he gets the ball something extraordinary seems to happen."

Messi's first season as club captain brought a third consecutive La Liga title and he scored the winner in the game that clinched it, a 1-0 victory over Levante.

He also claimed his sixth Pichichi Trophy as the division's top scorer, with 36 goals in 34 matches.

But Barcelona unravelled as their 3-0 advantage over Liverpool -- to which Messi contributed a brace -- went up in smoke at Anfield and the club crashed out in the semi-finals of the Champions League.

They were then beaten by Valencia in the final of the Copa del Rey, when Messi's tap-in proved a consolation, but it was his voice that spoke loudest in defence of coach Valverde, whose survival owed much to the support of his captain.

Messi had led the way on the pitch too, particularly during the run-in when he scored 16 goals in 12 games as Barcelona put together a relentless winning streak.

"This league has one person's name on it," wrote Diario Sport.

He scored his 50th career hat-trick in a 4-2 win at Sevilla and in April, another hat-trick began with a free-kick into the top corner and ended with a sweeping chip from the edge of the area that was so good even the Real Betis fans felt compelled to applaud.

When asked about their reaction, Messi said: "To be honest I don't remember anything like that."

His goal was nominated in the FIFA Puskas Award's 10-long shortlist.

"I have not seen any player like Messi in the history of football," said Betis coach Quique Setien.

"His goal was something you do playing Playstation."

After finishing the Champions League as top scorer with 12 goals and collecting his sixth Golden Shoe for a record third consecutive year, Messi joined up with Argentina for the Copa America, a tournament that kickstarted a frustrating three months for the 32-year-old.

Messi was sent off against Chile in the third-place play-off and his comments about the refereeing drew him a three-month suspension from international football.

A return to Barcelona should have offered some respite but Messi suffered a calf injury on the first day of pre-season before a thigh strain meant he would not begin playing regularly again until October.

Yet he made up for lost time by scoring six goals in five games and then a hat-trick against Celta Vigo, this time a treble made up of set-pieces, two from free-kicks and one a penalty.

It was his 34th hat-trick in La Liga, equalling Ronaldo's record in the Spanish top flight.

Free-kicks have become an increasingly potent weapon for Messi and his improvement is more evidence of a player still adding to his skill-set in what can be assumed will be his twilight years.

"It's clear that when games are close we have the advantage of having the best player in the world and the best free-kick taker in the world," said Barca midfielder Sergio Busquets.

Another milestone came at the end of November when his goal and two assists in a 3-1 win over Borussia Dortmund coincided with his 700th appearance for Barcelona. On Sunday, he scored the winner in a 1-0 victory at Atletico Madrid.

Barcelona insist they have plans for coping with Messi's dreaded retirement but the truth is their number 10 will be irreplaceable.

He has unfulfilled ambitions too, including another Champions League crown, not to mention an elusive major trophy with Argentina. Despite it all, Messi is not finished yet.