The Belgian settled the match with his ninth goal of the season after Lautaro Martinez went down under Riccardo Orsolini’s challenge. 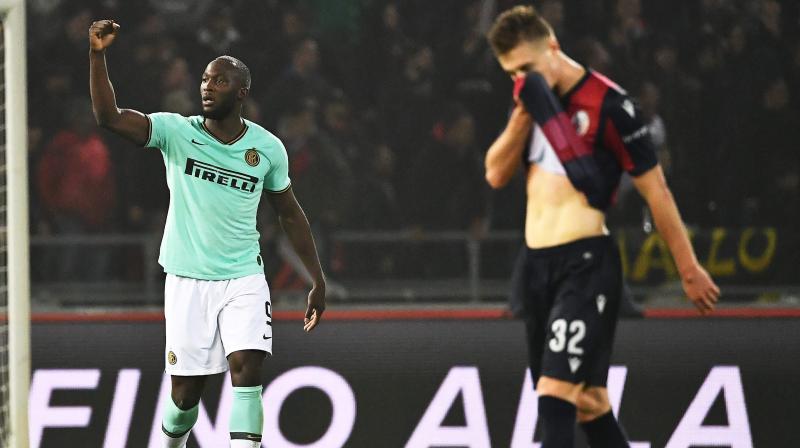 Romelu Lukaku scored twice in the last 15 minutes, the second a stoppage-time penalty, as Inter Milan dramatically came from behind to win 2-1 at Bologna in Serie A on Saturday and keep up the pressure on Juventus. (Photo:AFP)

BOLOGNA: Romelu Lukaku scored twice in the last 15 minutes, the second a stoppage-time penalty, as Inter Milan dramatically came from behind to win 2-1 at Bologna in Serie A on Saturday and keep up the pressure on Juventus.

The Belgian settled the match with his ninth goal of the season after Lautaro Martinez went down under Riccardo Orsolini’s challenge in the penalty area.

Although the decision appeared clear cut, Bologna were furious at having their own penalty appeal turned down in a previous attack and the match ended amid angry protests from the home team and jeering from their fans.

The win meant that Inter, who have 28 points from 11 games, would finish the weekend as Serie A leaders if Juventus, who were two points behind, failed to beat neighbours Torino later on Saturday.

“The team showed a great reaction. We conceded a goal that could have destroyed us but these lads demonstrated fantastic inner strength,” said Inter coach Antonio Conte.

“We’re working hard and the thing that is making me happy is working with a group of serious and willing lads. Today, those who came on also did really well, they all have a drive that allows them to never give up in adversity and this is the most important aspect.”

Inter had two goals disallowed in the first half, the first for offside against Martinez and the second because the ball went out of play before Valentino Lazaro — making his first start since his move from Hertha Berlin — pulled the ball back for Lukaku to turn into the net.

Bologna had not beaten Inter at home since 2002, a run of 14 matches, but looked as if they could end that sequence when Roberto Soriano gave them shock lead with a deflected shot in the 59th minute.

Lukaku missed a chance for a quick equaliser by failing to make proper contact with Lazaro’s low cross but he made no mistake in the 75th minute, turning in the rebound after Lukasz Skorupski made a superb save from Milan Skriniar’s shot.

Bologna had a penalty waved away when Rodrigo Palacio went down under a challenge late in the game and, in Inter’s next attack, Orsolini clumsily kicked Martinez’s leg and gave away a penalty which Lukaku comfortably dispatched.