Kerala held early advantage and had the first shot at goal when Rahul worked his way into the box only to shoot the ball high. 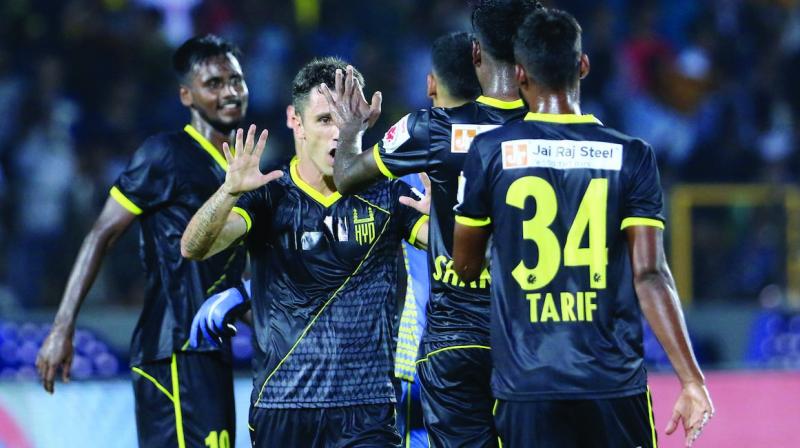 Hyderabad FC’s Marcelinho celebrates after scoring against Kerala Blasters in their Hero ISL match in Hyderabad on Saturday.

Hyderabad: High on energy, Hyderabad proved a handful to Kerala Blasters in their first game at home to hammer them 2-1 in their Indian Super League match on Saturday night.

It was all square at the Gachibowli Stadium after Marco Stankovic cancelled out Rahul Kannoly Praveen’s 34th minute strike with a punishing penalty in the 54th. Then, a magnificent curling free kick by Marcelo in the 81st minute sent the Kerala net bulging and home fans into raptures. The Brazilian leapt with joy, over the advertising hoardings and celebrated the stunner in front of the ecstatic crowd.

Kerala held early advantage and had the first shot at goal when Rahul worked his way into the box only to shoot the ball high.

Five minutes later, he made another attempt at opening the scoring but his kick from the edge of the box rolled past the Hyderabad post with captain and goalkeeper Kamaljit Singh cheerfully letting it be.

Kerala cracked the home defence deep into the first half courtesy Rahul who capitalised on a bouncy forward pass from Sahal Abdul Samad to blast the ball in from close range past a flailing goalie. They came close to doubling the lead in the injury time of the first half but captain Bartholomew Ogbeche’s header rolled wide.

Hyderabad did make some forays forward but lacked the numbers in front of the Kerala goal as the attacks fizzled out. One such was when striker Robin Singh not able to control a measured pass from Marcelo at the Kerala goalmouth. Then, the resultant corner went in vain after Shankar headed wide.

However, one move resulted in a penalty, and goal. Mouhamadou Moustapha Gning tripped Mohammed Yasir in the box for the referee to point to the spot, from where Marko Stankovic made no mistake to equalise for Hyderabad.

Marcelo then tired a long ranger in 57th minute but the ball sails over. He made amends later though, to bury a brilliant curler into the net that would prove to be the winner.

The atmosphere at the Stadium was lively with a scores of supporters turning up to root for Hyderabad while Kerala’s boisterous travelling fans bathed a section of the stand in yellow, often switching on flashlights on their phones and holding them up high to spur their players.