Atletico and Sevilla failed to capitalise, instead playing out a pulsating draw in which both teams will rue chances missed. 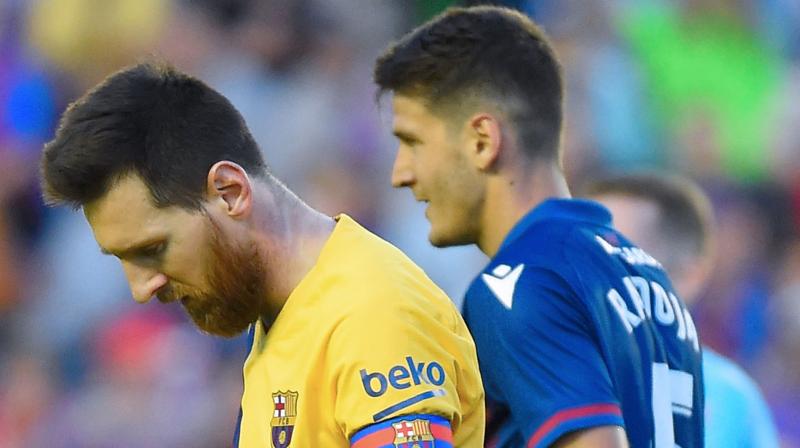 Lionel Messi scored again but was helpless to prevent Barcelona conceding three goals in seven minutes as Levante stormed to a surprise 3-1 victory in La Liga. Messi converted a first-half penalty at the City of Valencia Stadium for his sixth goal in five games. (Photo:AFP)

Messi converted a first-half penalty at the City of Valencia Stadium for his sixth goal in five games only for Levante to stun the defending champions with an incredible treble shortly after the hour on Saturday.

"We didn't start the second half well, we weren't creating chances and although they weren't either they suddenly scored two goals. The third one hurt us a lot."

Jose Campana and Borja Mayoral scored in the 61st and 63rd minutes before Nemanja Radoja added a third in the 68th to finish Barca off and give Real Madrid the chance to move top of the table later on Saturday. Levante climb to eighth.

Atletico Madrid or Sevilla could have claimed first place but neither were able to find a winner in an entertaining 1-1 draw at the Ramon Sanchez Pizjuan, where Diego Costa missed a penalty.

After seven consecutive victories in all competitions, Barcelona arrived in Valencia as overwhelming favourites to cement their place at the summit, particularly given the irresistible form of Messi.

His goal was the 500th of his career with his left foot and it looked likely to give Valverde's team another three points until bedlam ensued in the second half.

"Opponents always play us like it is one of the biggest games of the year," Valverde added.

"You have to have an answer."

After any Barcelona defeat, Valverde's future is a topic for discussion. Asked if he was surprised by his players or might consider resignation, he said: "No, to both questions."

To make matters worse, Luis Suarez was forced off in the 41st minute with an injury to his right calf and would now appear to be a doubt for Tuesday's Champions League game at home to Slavia Prague.

Levante started well and Barcelona were fortunate to escape a ragged few minutes that included Suarez being booked for a foul committed by Arthur Melo. Referee Hernandez Hernandez corrected his error after being made aware by VAR.

Barcelona settled, long periods of possession finding a successful outlet down the left where Nelson Semedo twice slipped Antoine Griezmann in behind right-back Jorge Miramon, who then conceded the penalty.

This time it was Semedo who broke clear and Miramon clipped the defender's heel, allowing Messi to sweep the spot-kick high into the corner, even if replays suggested Griezmann had been offside.

Suarez's unfortunate half continued as he was replaced by Carles Perez and Messi might have made it two before half-time only for Miramon to restore some credit by clearing the finish off the line.

Levante began the second half on the front foot but nobody could have predicted what was to follow as three goals turned the game on its head.

First, Pique's under-hit clearance came straight back, as Mayoral and Jose Luis Morales shifted the ball quickly inside to Campana, who struck hard into the corner.

Then a loose Perez header allowed Mayoral space and he did brilliantly to curl past the outstretched right hand of Marc-Andre ter Stegen.

With the home fans still celebrating, Radoja made it three. Barcelona again failed to clear and Radoja's effort might have been saved had Sergio Busquets, on as a substitute, not stuck out his right leg and caused a cruel deflection.

Messi thought he had launched a comeback when he bundled through and scored but the goal was ruled out after Griezmann was spotted to have been offside.

That seemed to kill Barca's belief and, if anything, Levante should have made it four late on. Gonzalo Melero had only Ter Stegen to beat but he shot wide.

Atletico and Sevilla failed to capitalise, instead playing out a pulsating draw in which both teams will rue chances missed.

Costa was most guilty, his 72nd-minute penalty saved by Tomas Vaclik after Alvaro Morata scored his fourth goal in four games to cancel out Franco Vazquez's opener.