Despite Mumbai City’s capricious campaign so far, the experienced defender is confident his team will do well. 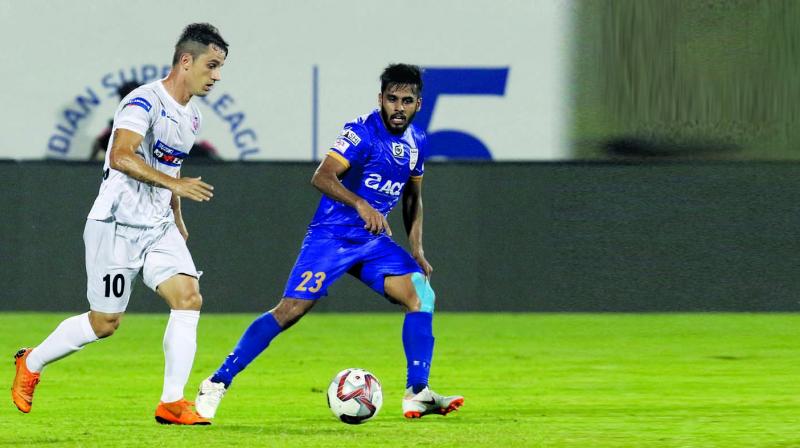 Chennaiyin are without a win and are struggling, but they are still a dangerous side at home.

Mumbai City FC team enjoy a six-day break before they take on defending champions Chennaiyin FC on Saturday. Gaffer Jorge Costa's boys had an up and down campaign so far with two wins, two losses and a draw.

Defence cracked up against Jamshedpur FC in the opening game at Mumbai Football Arena before doing a decent job against Kerala Blasters in an away game and FC Pune City at home. It crumbled against FC Goa before putting up a show against Delhi Dynamos here.

Chennaiyin have been struggling this season and are without a win but they are still a dangerous side at home. Experienced right-back Souvik Chakrabarti is confident that the Islanders will do well in the remaining matches.

“We had a good rest and also a detailed discussion about mistakes we made and how we can improve. We have not done badly barring that particular game (against Goa). Coach told us we were good in the first half but literally gave up in the second half. We all committed mistakes and tried to solve it.  We came back well against Delhi. I am hopeful to continue that performance,” he said in an interview.

Former Air India midfielder Souvik switched to a defensive role in Indian Super League and has been the preferred choice for Costa so far despite conceding first penalty in Goa. He, alongside Lucian Goian and youngsters Subhasish Bose, Joyner Lourenco, is shaping up to make Mumbai defence compact under the able guidance of former Portugal and Porto defender, Costa.

“I am enjoying my stint here. I have been quite comfortable in a defensive role after starting as midfielder. I made the switch after Delhi Dynamos coach asked me and I settled down quite well.  We have a good understanding and there is always lots to learn from coach. We will try to improve with every game,” said Chakrabarti who played for Dynamos in the first three ISL seasons and was part of Jamshedpur FC last season.

The Bengal player started his junior career at Mohun Bagan and later was part of Mohun Bagan senior team for three seasons. But it was his stint with Mumbai based Air India that introduced him to the I-League. Air India was playing in I-League before AFC norms for all clubs became mandatory and the city-based club was found non-compliant with those norms.

“It was the start of my career, we were all young players. I got a lot of playtime, which developed me as a player.  That experience comes in handy even now, " said the 27-year-old who has made it into the Indian national football team on a couple of occasions but is yet to make any appearance. But, he hasn't given up on his dream of playing for India yet.