Lacazette scored twice in the first half after Diakhaby had stunned the Emirates crowd with an early header to give Valencia the lead. 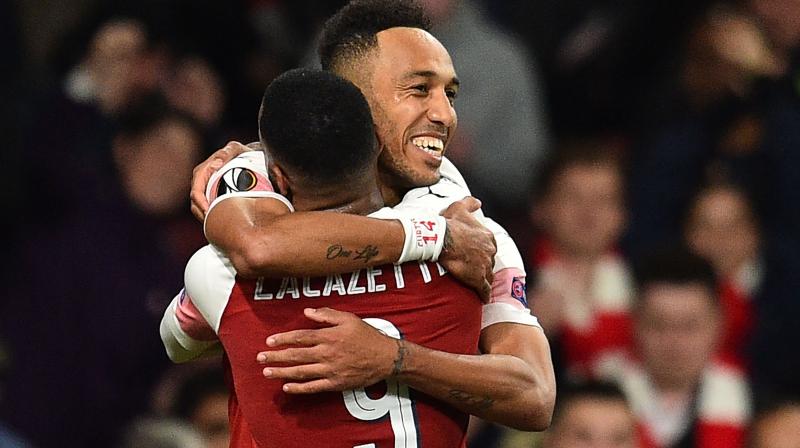 The tie was still balanced on a knife edge, however, before Gabon striker Aubameyang’s 90th-minute volley put his side in control ahead of the second leg in Valencia’s Mestalla. (Photo: AFP)

London: Arsenal’s Pierre-Emerick Aubameyang struck a vital late goal to seal a 3-1 win over Valencia on Thursday and give his side breathing space for the second leg of their Europa League semi-final in Spain next week.

Alexandre Lacazette scored twice in the first half after Mouctar Diakhaby had stunned the Emirates crowd with an early header to give Valencia the lead.

The tie was still balanced on a knife edge, however, before Gabon striker Aubameyang’s 90th-minute volley put his side in control ahead of the second leg in Valencia’s Mestalla.

Unai Emery’s team will need to show more steel than they have done away from home for much of the season, though, if they are to reach the final in Baku and a possible meeting with London rivals Chelsea.

Chelsea drew 1-1 away in the first leg of their semi-final against Eintracht Frankfurt.

Arsenal, Europa League semi-finalists last year, had lost three consecutive Premier League games to drop to fifth place in the table with two games left — undermining their hopes of qualifying for the Champions League via a top-four finish.

But Emery has a special relationship with the Europa League having won it three times in a row with Sevilla and delivering the trophy to Arsenal for the first time now looks their most likely route back into the elite tournament.

“We know it’s going to be hard (in Valencia) so of course getting as many goals as we could is better for us,” Lacazette, who should have been celebrating a hat-trick, said.

“Thankfully, Auba scored the third one.We want to win the Europa League to go straight to the Champions League but also to win a trophy.”

Arsenal had conceded nine goals in their last three Premier League games and it was easy to see why in a dreadful opening.

Valencia, themselves struggling to secure a top-four spot in La Liga, sliced through the home defence at will and had gone close to scoring before Frenchman Diakhaby put them ahead.

When a corner was swung over in the 11th minute, an unmarked Rodrigo headed it back across goal where Diakhaby rose above three stationary Arsenal defenders to nod past Petr Cech.

For a while there was panic in the Arsenal ranks and both Daniel Parejo and Goncalo Guedes threatened a second.

But Lacazette stopped Valencia in their tracks seven minutes after the hosts went behind.

He released Aubameyang with a superb pass before arriving in the box to steer a shot past Neto after his fellow striker cleverly held up the ball before squaring it.

Seven minutes passed before Granit Xhaka’s cross found Lacazette and his downward header had just enough power to cross the line despite Neto’s desperate attempt to keep it out.

Suddenly Arsenal were rampant and another Xhaka cross found Aubameyang but he bounced his volley over.

Valencia burst back into life in the second half and it needed a brave header by Arsenal captain Laurent Koscielny to stop a cross reaching the dangerous Goncalo Guedes.

Lacazette wasted two gilt-edged chances to put the hosts in control, miscuing a header from Aubameyang’s cross with the goal gaping and weakly shooting straight at Neto.

Valencia, losing semi-finalists in 2012 and 2014, would have been reasonably content heading back to Spain with a one-goal deficit but they switched off in the dying minutes.

Moments after Neto had made a superb save, Arsenal kept the ball alive and Sead Kolasinac’s cross found Aubameyang at the far post to drive his volley home.