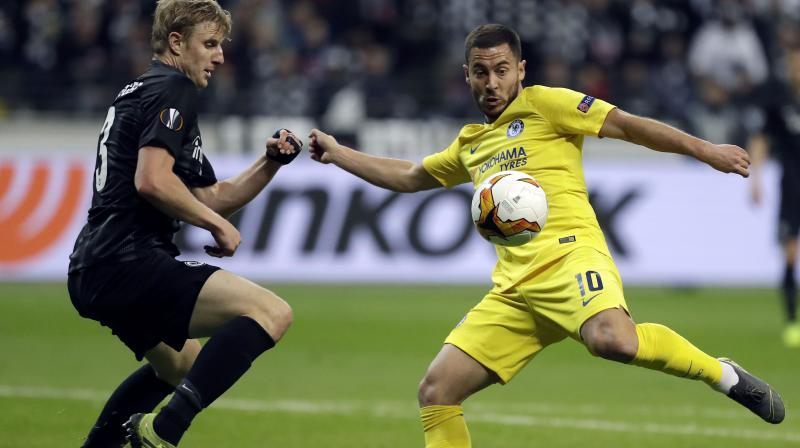 The second leg is at Stamford Bridge next Thursday, when the positions in the Premier League will also come into clearer focus before the final weekend. (Photo: AP)

Frankfurt: Chelsea set a Europa League record of 16 successive matches unbeaten on Thursday with 1-1 semi-final first leg draw at Eintracht Frankfurt thanks to a Pedro equaliser on the stroke of half time.

Serbian Luka Jovic had put the hosts ahead after 23 minutes.

They took time to find their stride, however, with Jovic stooping to head past the outstretched Kepa Arrizabalaga off a cross from compatriot Filip Kostic with a goal that raised the decibels in a stadium famed for its atmosphere.

Jovic, firmly on the radar of top clubs across Europe, has now scored nine goals in the competition and 26 in all this season.

Frankfurt failed to press home their advantage, however, running out of energy in a second half dominated by the visitors with Jorginho dictating play.

Ruben Loftus-Cheek led the fightback, blasting just wide in the 42nd minute and then nimbly beating defenders before feeding the ball through to Spanish winger Pedro who hammered in a low left-foot shot.

Chelsea were far livelier after the break, with the hosts having another close escape when David Luiz rattled the crossbar from a dipping free kick.

Frankfurt captain David Abraham headed over the bar while unmarked with six minutes remaining after an optimistic appeal for a penalty came to nothing.

“At 1-0 down we were a bit in trouble,” Chelsea captain Cesar Azpilicueta said.

“I think the last 15 minutes of the first half we dominated with great chances. We scored the goal before halftime and in the second half I think we had more chances than them.”

Both sides are fourth in their domestic leagues, with the Europa League offering an alternative route to next season’s Champions League.

The second leg is at Stamford Bridge next Thursday, when the positions in the Premier League will also come into clearer focus before the final weekend.

Chelsea manager Maurizio Sarri left Eden Hazard on the bench until the 62nd minute, preferring to rest the Belgian forward for those important remaining Premier League games against Watford and Leicester City.

When Hazard did come on, he had a shot tipped over the bar.

“I am very happy with the performance but not with the result,” said Sarri, who felt Chelsea should have scored more.

“After 25 minutes we started to play. We played very well in the last 20 minutes of the first half, very well for 35 minutes in the second half. And so I think that at the end we deserved to win. But 1-1 away is not so bad.”

Arsenal beat Valencia 3-1 in the other semi-final first league, increasing the likelihood of an all-London final in Baku.