Sarri's comments came after Chelsea's 1-1 draw with Eintracht Frankfurt in the first leg of semi-finals of Europa League. 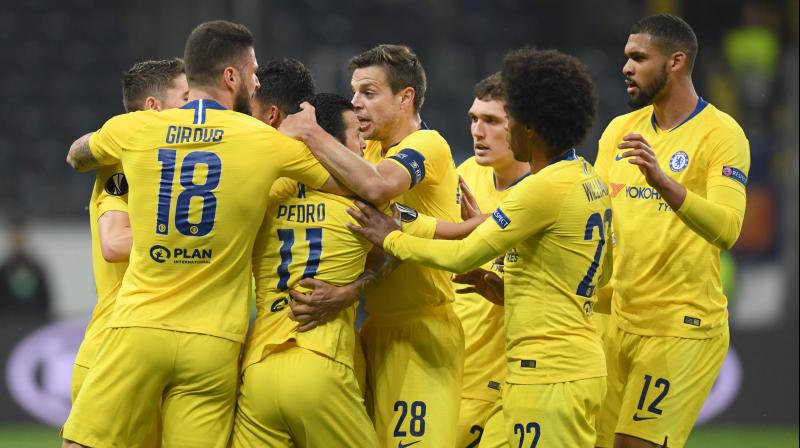 Chelsea will now face Eintracht Frankfurt for the Europa League's second leg of semi-finals on May 10. (Photo: AFP)

Leeds: Chelsea manager Maurizio Sarri expressed that he wants to reach into the finals of Europa League and win it.

"I want to reach the final against any team, Arsenal or Valencia," Sarri was quoted as saying by Goal. "It's exactly the same for me, who we play. I don't want to play the final. I want to win it. Three months ago, we were in trouble in a very difficult championship and it's not easy to react, but we were able to react. Now, in the last 15 days of the season, we are fighting for the top four and the final in the Europa League, so we deserve a trophy," he added.

Sarri's comments came after Chelsea's 1-1 draw with Eintracht Frankfurt in the first leg of semi-finals of Europa League.

Eintracht Frankfurt scored the opening goal when the game was in the 23th minute. Sarri feels that his team made a mistake in the first 20 minutes as they were trying to restrict the game to 0-0, however, they failed to do so.

"I think that we made a mistake in the first 20 minutes because my feeling was, from the bench, that we were playing only to manage the result for the 0-0. But we are not able to do that," Sarri said.

Chelsea's Pedro scored the equalizer in the 45th minute and the match concluded on the same.

Chelsea will now face Eintracht Frankfurt for the Europa League's second leg of semi-finals on May 10.