Serie A: Udinese keeps AC Milan at bay with a 1-1 draw

Milan struggled to create chances and lost goalkeeper Gianluigi Donnarumma and midfielder Lucas Paqueta to injury in the first half. 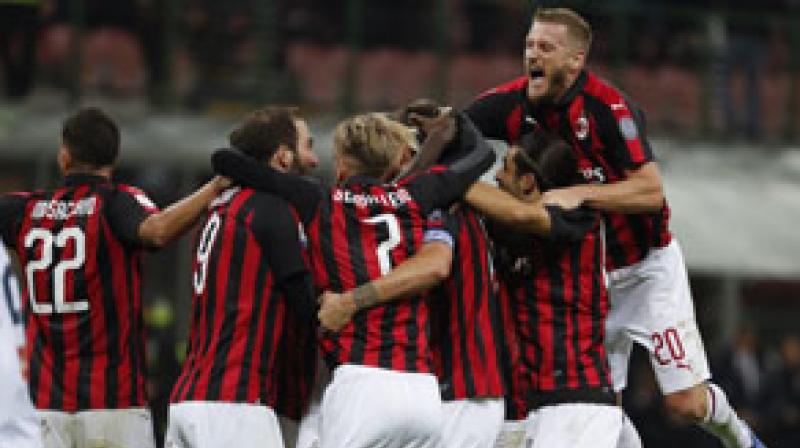 Milan stayed fourth, the lowest Champions League slot, with 52 points but have taken one point from their last nine and have Lazio lurking four points behind with two games in hand. (Photo: PTI)

Milan: Lowly Udinese held AC Milan to a 1-1 draw at San Siro on Tuesday, equalising on the counter-attack from an opposition corner to hand another setback to Gennaro Gattuso’s team.

Kevin Lasagna earned a point for relegation-threatened Udinese after a sweeping move in the 65th minute to cancel out Krzysztof Piatek’s opener for the hosts just before halftime.

Milan stayed fourth, the lowest Champions League slot, with 52 points but have taken one point from their last nine and have Lazio lurking four points behind with two games in hand.

Atalanta (48), AS Roma (47), Sampdoria and Torino (both 45) could also close the gap if they win their midweek games.

“We didn’t do very much today and in the second half, I saw a soft team,” said Gattuso. “We are playing with the handbrake on at both a mental and physical level.”

Milan struggled to create chances and lost goalkeeper Gianluigi Donnarumma and midfielder Lucas Paqueta to injury in the first half but went ahead in the 44th minute.

Patrick Cutrone’s cross into the middle was met by Piatek whose first shot was saved at point-blank range by Juan Mussu but the Pole headed in the rebound for his 20th Serie A goal of the season — seven for Milan and 13 for Genoa.

There was a remarkable twist midway through the second half when Milan nearly got a second goal but instead conceded the equaliser.

A Milan corner was missed by keeper Mussu but Nicholas Opoku cleared the ball off the line and started a lethal counter.

The ball was swept out to Seko Fofana on the left and he squared to Lasagna who fired past Pepe Reina from 12 metres.

It could have been worse for Milan as Sebastian de Maio and Lasagna missed further chances for Udinese, who are 15th with 29 points, four clear of the relegation zone.

“We could have scored two or three goals but it’s a valuable point that could prove useful at the end of the season,” said Igor Tudor, who is Udinese’s third coach of the season.