The win moved Atletico to 62 points, eight behind Barca, who came from two goals down to snatch a 4-4 draw at Villarreal. 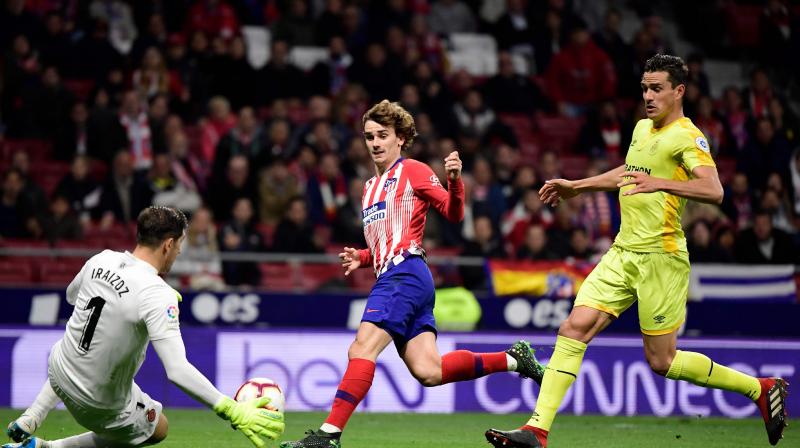 Barca host Atletico in a top-of-the-table clash on Saturday, where a win for the Catalans could effectively end the title race. (Photo: AFP)

Madrid: Atletico Madrid left it late to see off Girona 2-0 at home on Tuesday as strikes from Diego Godin and Antoine Griezmann kept up their faint hopes of catching La Liga leaders Barcelona, trimming their deficit with the Catalans to eight points.

Captain Godin finally broke the deadlock in the 76th minute with the help of the Video Assistant Referee (VAR) after the goal had been initially ruled out for offside against Griezmann.

That gave Atletico a lead they barely deserved and France striker Griezmann sealed victory deep in added time with a perfect chipped finish after a counter-attack, snapping a seven-game spell in all competitions without a goal for his club.

“I sincerely thought they weren’t going to give us the first goal. We are used to seeing goals like that disallowed when we score them,” Atletico coach Diego Simeone told reporters.

The win moved Atletico to 62 points, eight behind Barca, who came from two goals down to snatch a 4-4 draw at Villarreal.

Barca host Atletico in a top-of-the-table clash on Saturday, where a win for the Catalans could effectively end the title race.

Tuesday’s game kicked off in a subdued atmosphere as a large number of Atletico fans waited until the 12th minute to enter the ground in protest at the team not acknowledging travelling fans after last month’s 3-0 Champions League loss at Juventus.

The strange atmosphere appeared to rub off on the Atletico players as they were lacklustre in defence in the first half and goalkeeper Jan Oblak had to make two impressive saves to prevent Girona’s Ivorian forward Seydou Doumbia from scoring.

The hosts, meanwhile, nearly took the lead when a stinging long-range strike from midfielder Koke thumped the crossbar, and Alvaro Morata spurned a clear chance to score later in the first half as he sent an attempted lob just over the bar.

Morata had to be substituted in the second period with a suspected ankle injury, adding to Atletico’s problems in attack ahead of the crucial trip to the Nou Camp with Diego Costa and winger Thomas Lemar already battling to be fit.