The club have won just 18 points in the Premier League this season, their fewest after 14 games of a top-flight campaign since 1988-89. 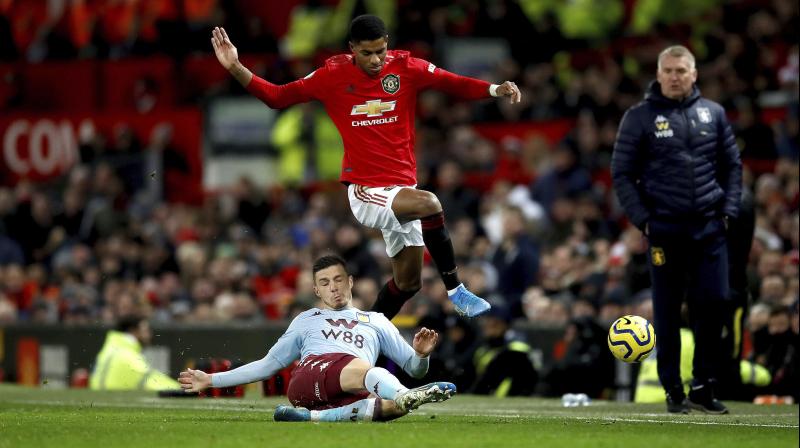 A short corner led to Andreas Pereira floating in a deep cross which Marcus Rashford rose well to head against the post with the ball bouncing in off helpless Villa keeper Tom Heaton in the 42nd minute. (Photo:AP)

Manchester: Manchester United manager Ole Gunnar Solskjaer suffered another frustrating afternoon as his team were held to a 2-2 draw at home to lowly Aston Villa at Old Trafford in the Premier League on Sunday.

United came back through an own goal and a Victor Lindelof header to lead after falling behind to an 11th-minute Jack Grealish goal but had to settle for a point that leaves them in ninth place, 22 points adrift of Liverpool after 14 games.

The club have won just 18 points in the Premier League this season, their fewest after 14 games of a top-flight campaign since 1988-89.

Solskjaer’s side now face two big tests with their former manager Jose Mourinho returning with Tottenham Hotspur on Wednesday before the Manchester derby at the Etihad on Saturday.

“As a club we don’t like to be in this position but that’s the reality. Wednesday we have a big game, Saturday, these boys are looking forward to every game,” he added.

United fans will be far from confident of positive results in those games after another poor display from a team lacking authority and quality in midfield against a Villa side inspired by the creativity of Grealish.

After a wide-open start to the game, Grealish fired Villa ahead, cutting in from the left and expertly curling the ball into the far, top corner.

Villa substitute Trezeguet had the ball in the net in the 29th minute but his effort was ruled out for offside and three minutes before the break United got a barely deserved equaliser.

A short corner led to Andreas Pereira floating in a deep cross which Marcus Rashford rose well to head against the post with the ball bouncing in off helpless Villa keeper Tom Heaton in the 42nd minute.

Villa continued to play with ambition after the break and Grealish could have added a second goal but his outstretched foot turned a Trezeguet ball just wide of the post.

It was another corner routine which led to United taking the lead after 64 minutes; this time Fred’s cross was inadvertently headed to the back post by Villa striker Wesley and United’s Swedish defender Lindelof nodded home.

The lead last only two minutes before Villa got back on level terms, the impressive Matt Targett chipping the ball into the box to an unmarked Tyrone Mings who volleyed home.

While the defender looked offside VAR ruled that it was valid, giving the centre-half his first Premier League goal.

United pushed forward in response but lacked the finesse to open up the Villa defence and their skipper Harry Maguire admitted the performance had not been good enough.

“As a team we are improving but we want to improve a lot more. To not win games at home is disappointing,” he said.

“We huffed and puffed but we need to do better and Wednesday (against Spurs) gives us a great opportunity to put that right.

“We were poor after their first goal. It knocked us and we were edgy and nervous. To concede straight away after going in front, it’s disappointing,” added the England international.

“He knows more than anybody that nine times out of 10 he scores that. He’ll be pleased because of his goal but he won’t sleep because of that miss,” he said.

I have no regrets, my career has been fulfilling, says Dilip Vengsarkar