Jack Grealish reminds Old Trafford of what they are missing

Grealish opened the scoring in the 11th minute with a beautiful, curling effort into the top corner — right in front of the Stretford End. 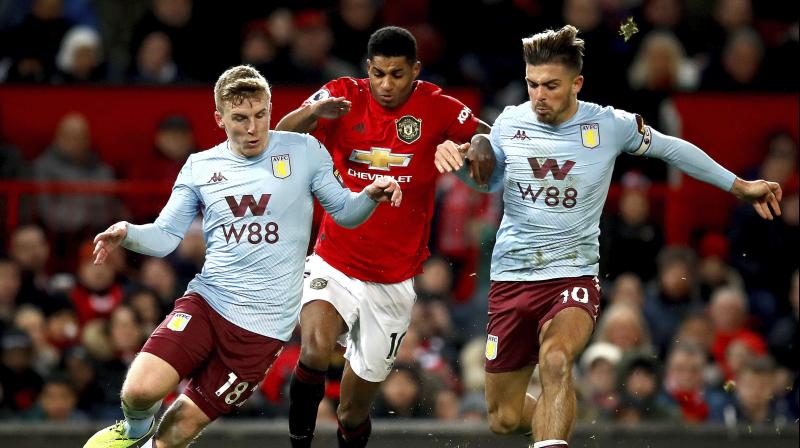 The problem for those fans was that the player in question was Jack Grealish — the Aston Villa midfielder whose swagger and craft, not to mention his attention to his hairstyle, has more than a hint of former Manchester United favourite David Beckham. (Photo:AP)

MANCHESTER: There was one player on the field during Manchester United’s 2-2 Premier League draw with Aston Villa on Sunday who had the kind of flair, imagination and creativity that the Old Trafford faithful have come to expect over the years.

The problem for those fans was that the player in question was Jack Grealish — the Aston Villa midfielder whose swagger and craft, not to mention his attention to his hairstyle, has more than a hint of former Manchester United favourite David Beckham.

Grealish opened the scoring in the 11th minute with a beautiful, curling effort into the top corner — right in front of the Stretford End — and continued to be a threat through the game, making it impossible not to notice the contrast with United’s unimaginative midfield.

In fairness, United manager Ole Gunnar Solskjaer is without his best midfielder, injured French midfielder Paul Pogba and he was also lacking the physical presence of Scott McTominay, leaving him with few options.

But the combination of the rarely impressive Brazilian Fred, the fading 31-year-old Juan Mata and the workmanlike Andreas Pereira never took a grip on the game with any authority.

Villa are 15th in the Premier League and are unlikely to finish too far away from that position and yet United struggled to impose themselves on them, especially in the first half.

Solskjaer, whose side are ninth, level on points with Burnley and Crystal Palace, has struggled to get results in what was billed as a transitional season for his young team.

If United’s hierarchy want improvement this season then they must surely back Solskjaer in the transfer window and provide him with the missing quality his side needs.

In the summer, United did bring in three additions in defenders Harry Maguire and Aaron Wan-Bissaka and winger Daniel James but more is needed in the winter if United are to avoid a soul-destroying second half of the season and a mid-table finish.

They need a commanding presence in the centre of midfield, a holding player who can give them the kind of steel that Fernandinho gave Manchester City last season or Fabinho has provided for Liverpool this term.

An alternative or back-up to Anthony Martial at centre-forward would also be welcome and so would a creative midfield playmaker capable of providing the killer passes that Martial and Marcus Rashford could thrive on.

Asked about Grealish’s performance and whether he felt he was the kind of player United needed, Solskjaer was careful in his choice of words.

“I can’t talk too much about other teams’ players, if they’re Man United calibre or targets. But fantastic goal, I think he hit one of them corners I hit a couple of times. It was a great finish but we should defend better, show him down the left.

“But what a goal and he played a good game.”

Whether or not Grealish does become a transfer target for United, he should certainly be getting greater consideration from England manager Gareth Southgate, who has yet to cap him.

“All Jack can control is his performances and if he keeps performing the way he is, he puts more pressure on the people choosing those squads,” said Villa manager Dean Smith.

“Jack is getting better and better. He is a top player and when you have top players you get performances at places like this.”