Real Madrid are at a six-point lead and at top of the La Liga table. 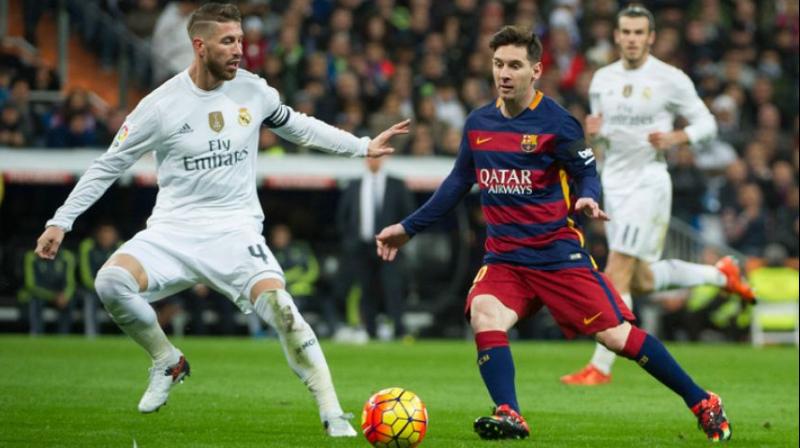 First El Clasico clash of the season between Barca and Madrid on Saturday (Photo: AFP)

Madrid: Barcelona to go against rivals Real Madrid for the first El Clasico of the season. Real Madrid to visit Catalonia on Saturday, boasting a six-point lead at the top of La Liga.

Barcelona are desperate to win against Madrid as they have won 15 more points in all in La Liga under the guidance of Zinedine Zidane since the sides last met in April. They are at a 31-game unbeaten run in all competitions.

"On Saturday we have more to play for than Madrid, they can lose, we can't," said Barcelona defender Gerard Pique.

Barca are off to their worst league start in nine seasons. However, coach Luis Enrique believes much of the media criticism of his side has been overblown, citing the institutional crisis that Barca overcame in the January his debut season in 2015 to win the treble.

"We remain favourites for all the titles, but it is evident we have to improve," said Enrique. "We lack consistency, but don't exaggerate. In my first season you (the media) exaggerated and we ended up winning the treble."

The biggest match in club football is expected to capture an audience of 650 million people worldwide, according to figures released by La Liga.

"I am not going to say it is just another game, it is a very important match, it has a special meaning....a special taste," Real president Florentino Perez told AFP.

"No one hides that is has a worldwide impact, it is seen by millions of people across the world, like the World cup final."

Yet, the composed Zidane refused to accept that a first Liga title in five years would be Madrid's to lose should they bag victory at the Camp Nou.

"I am not thinking about the consequences," he said after giving a goalscoring debut to his son Enzo in Madrid's 6-1 Copa del Rey thrashing of Cultural Leonesa on Wednesday. "We are thinking about preparing well for the game, and, whatever happens, it will not be decisive."

Both sides are blighted by injury concerns. Madrid will be without Gareth Bale with the Welshman now set to miss up to four months after an ankle operation, whilst Toni Kroos is also sidelined by a broken foot.

Tough tackling midfielder Casemiro made his first appearance in two months in midweek and could come into contention to partner the Croatian duo of Luka Modric and Mateo Kovacic.