After seeing the video, the netizens declared the cow as GOAT (greatest of all time). 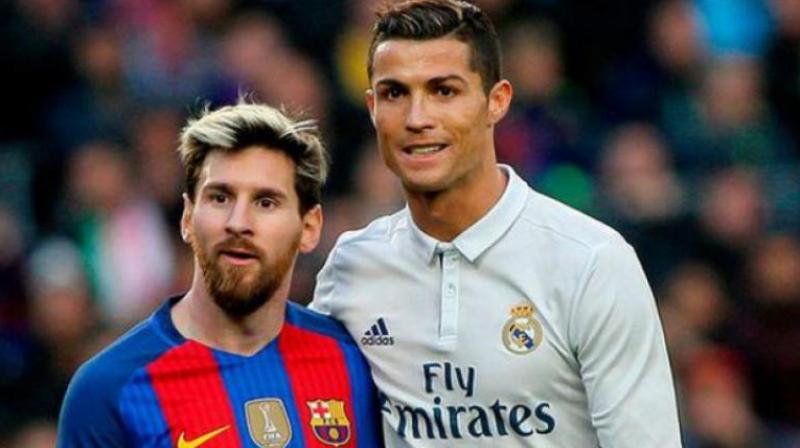 The video displays a group of young boys playing football in a field when the ball reaches the ‘holy animal’, it takes full possession of the ball.(Photo: AFP)

Mumbai: A cow in Goa has been lauded for showing its football skills after a video originated while it was playing with the ball. The video went viral so quickly that the video has been watched thousand times all over the social media and WhatsApp. After seeing the video, the netizens reacted to the funny video as the cow chased the ball and took possession of it.

Reportedly, it has been said that the video was shot in Mardol, Goa. The video displays a group of young boys playing football in a field when the ball reaches the ‘holy animal’, it takes full possession of the ball.

The boys tried really hard to snatch the ball from the hands of the cow, but it denied to let go of the ball, and it even started to move around kicking and thrusting the ball with its nose.

After one of the boys finally managed to snatch the ball from the animal, the players started passing the ball around so that it can’t have it back. However, the cow notices every pass the boys made and gets the possession of the ball back. Also, one boy chose not to challenge the cow.

After seeing the video, the netizens declared the cow as GOAT (greatest of all time) and stated that it could be an asset for the Indian football team. They even went on to tag FIFA to alert them that India has found a gem.

This is the funniest thing you will see today! pic.twitter.com/Kfz08Dka3Z

If it's 90 mins 1-0 lead, ball on the corner flag, I'd legit choose this cow over all Ballon d' ors..incredible shielding skills! https://t.co/Wx7xzttrZJ

This video doing the rounds on SM is really a fascinating one! Amazing skills and ball control exhibited by a cow!!. Football will be a different ball game from now on 😀😀😀 pic.twitter.com/AluLjuCIu0

This proves Football s are made of Cow Hide leather😂😂😂 https://t.co/hArAB8oGCM

This cow deserve a better football club ,
It's a shame such a great talent is getting wasted, seriously her game play is lot better than my squad 😁😂😅 hope that may be it gets better opportunities in future#AnimalEmpowerment-India https://t.co/EHYiFXb6ex

Even Messi or Fulani Headsmen cannot take this football from this cow. He is the real G.O.A.T.🤣🤣🤣 pic.twitter.com/DLJp5NJdp8

That awkward moment when you realize that this cow plays better football than you pic.twitter.com/lY9R6hf401

In last birth, this cow must have been a crazy football lover. https://t.co/4w8SgcMCaK

Indian National Football Team should hire the Cow. Only hope India has to qualify for the FIFA World Cup!

Best ever football match ... now m sure India will play in the next FIFA World Cup with this team ... but this our cow hav to be Forward Striker as well as captain of the team https://t.co/Tntk25VafI

Football is in the DNA of Goans.... even Goan cows love this game. #ForcaGoa https://t.co/JI1ou5GnvW