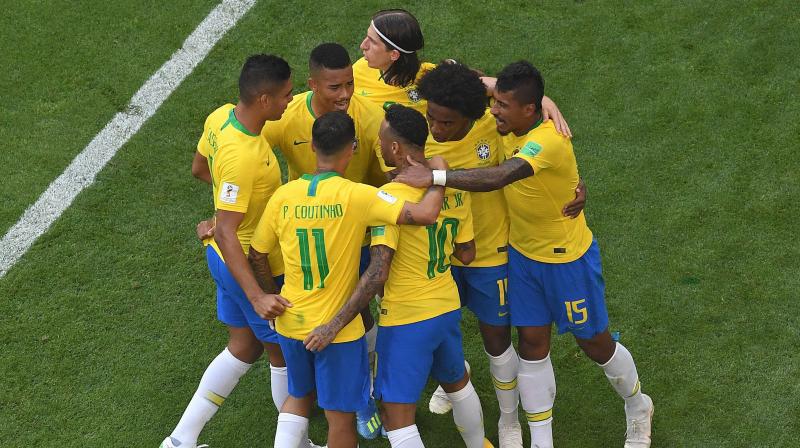 Samara: Second half goals by Neymar and Roberto Firmino sent Brazil to the quarterfinal of the FIFA World Cup as they beat Mexico 2-0 here on Monday.

After a goalless first half, it was a stunner by Neymar in the 51st minute who slided through to give Selecao a 1-0 lead. Mexico could not do much since then, and Brazil looked a far more superior side till the end of the match.

Later, in came substitute Roberto Firmino for Philippe Coutinho in the 86th minute. Three minutes later, he would go onto score the winner.

Six minutes were added as injury time after the allotted 90 minutes, but that was not enough for Mexico to make a late comeback in the game.

Brazil, who have not been knocked out of the last 16 since 1990, cruised to their seventh straight quarterfinals at the World Cup.

They will face the winner of the match between Belgium and Japan on Friday.

90 + 6': FULL TIME! Brazil are through to the quarterfinals after beating Mexico 2-0.

90': Six minutes have been added as injury time after the allotted 90 minutes.

And it looks like #BRA are on their way to the quarter-finals!

86': Another substitution for Brazil. Roberto Firmino comes in for Philippe Coutinho.

83': Thiago Silva (Brazil) is down with an injury.

80': Substitution for Brazil. Fernandinho comes in for Paulinho.

70': OH NO! Neymar is lying down on the ground and physio are serving to him. This is not a good sign.

66': Neymar misses the net by an inch, as the ball travels to the back of the goal.

60': One hour up, and Brazil are half an hour away from reaching their seventh straight World Cup quarterfinal.

51': GOOOAAAL! Neymar provides the breakthrough for Brazil as they are 1-0 up!. Willian crosses the ball to Neymar, who slides and scores the goal.

45' (Second half): The second half is underway! Mexico have made a substitution. Rafael Marquez is replaced by Miguel Layun.

45': HALF TIME! Injury time has not been added and players head for the break exactly at 45 minutes. Brazil 0- Mexico 0

33': The Mexican defenders are doing a fantastic job. They have just stopped from scoring twice.

30': Half an hour into the game, and it is still goalless.

25': Neymar has a shot on target, but the attempt is stopped by goalkeeper Ochoa.

15': Hirving Lozano has a shot attempt, but is off-target as the ball misses the net.

1': AND WE'RE OFF! Mexico begin the proceedings of this all-important contest.

The lineups have been announced for both the teams.

For Brazil, Marcelo starts on the bench after having suffered a back injury during the team's group game against Serbia.

Meanwhile, for Mexico, the familiar front three of Javier Hernandes, Hirving Lozano and Carlos Vela are all part of the starting XI.

Here is how the teams lineup:

Brazil will look to avoid the fate of teams like Germany, Spain, Portugal and Argentina when they take on Mexico in the FIFA World Cup round of 16 clash here on Monday.

In terms of overall head-to-head the numbers favour the Selecao, who have won 23 of the 40 meetings between the two teams. Meanwhile, Mexico are yet to beat the five-time champions in a World Cup encounter.

Brazil booked a spot in the knockouts after drawing with Switzerland and beating Costa Rica and Serbia. Meanwhile, Mexico qualified as runners-up from Group F despite losing to leaders Sweden as South Korea dumped Germany out of the tournament with a 2-0 win.

A loss for Brazil would mean that they would have exit from the last 16 for the first time since 1990. Since then, they have gone past the last 16 in every edition.

The match will take place at the Samara Arena in Samara.