Casillas played 167 times for Spain and famously captained them to their first ever World Cup win in 2010. 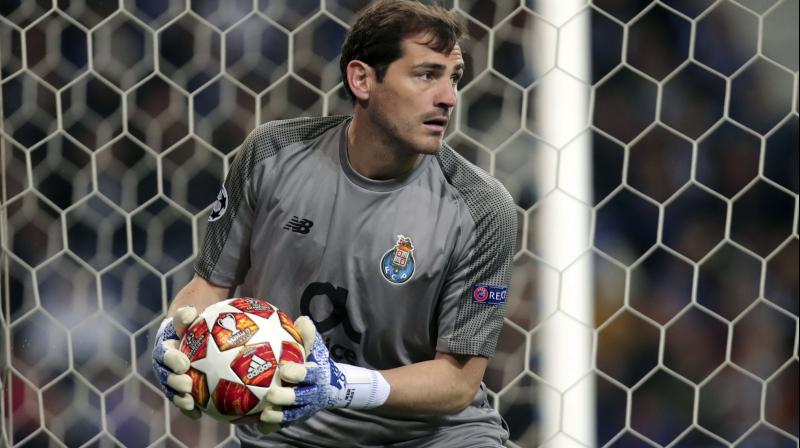 Madrid: Spain’s World Cup winning captain Iker Casillas, 37, suffered a heart attack while training with his Portuguese club Porto on Wednesday, but later tweeted from hospital to say he was “feeling strong”.

Casillas played 167 times for Spain and famously captained them to their first ever World Cup win in 2010.

He also won the 2008 and 2012 European Championships with the national side and his exploits earned him the nickname ‘Saint Iker’ as well as making him one of Spain’s best-known personalities.

Porto said Casillas had suffered an “acute” heart attack during training, but that he was stable in hospital and “the heart problem has been resolved”.

Casillas later tweeted: “Everything under control here, it was a big scare but I’m feeling strong. Thanks a lot for all your messages and your support.”

Born in Mostoles, Madrid, Casillas came through Real Madrid’s academy and spent the bulk of his career there before joining Porto in July 2015.

His 725 matches between 1999 and 2015 put him behind only his former team mate Raul, with 741, on Real’s all-time list. During that time he won five La Liga titles and three Champions League crowns.

He goalkeeper is married to the Spanish television journalist Sara Carbonero, with whom he has two children.

“Real Madrid would like to offer all our support to our beloved captain Iker Casillas. Throughout his professional career, he always overcame the hardest challenges in order to bring glory to our club."

“He has taught us to never give up and has shown us numerous times that the best way to win is to remain as strong as possible when times are tough.”

A tweet on the Spain team’s official account said: “All the family at the national team and the Spanish football federation are with you Iker Casillas. Get well soon.”