PSG ends season in a wreckless manner amid continuous defeats

A season which started with 14 straight league wins is ending in a calamitous manner for Paris Saint-Germain.. 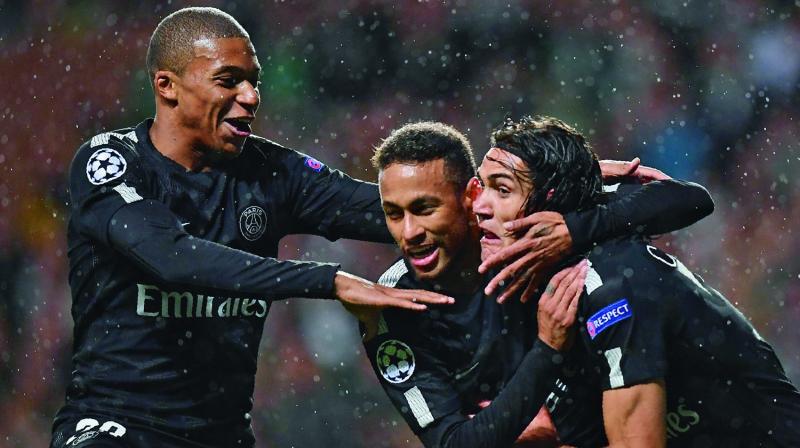 While the French league title has already been secured, a string of glaring individual errors, poor defending at set pieces and a lack of determination have seen PSG win just once in six games and concede 16 goals, including 11 in three straight away defeats. (Photo: AFP)

Paris: A season which started with 14 straight league wins is ending in a calamitous manner for Paris Saint-Germain.

While the French league title has already been secured, a string of glaring individual errors, poor defending at set pieces and a lack of determination have seen PSG win just once in six games and concede 16 goals, including 11 in three straight away defeats.

Hired to bring Champions League success to the club, Tuchel instead finds himself mired in a domestic crisis. Lille scored five against PSG , while Montpellier won 3-2 on Tuesday and Nantes previously netted three . Rennes overcame a 2-0 deficit to win the French Cup last weekend on penalties.

Never in the eight years since Qatari investors QSI took over has the club experienced such a bad run.

Having already won the league, PSG in theory has nothing left to play for in the last four games, starting with Nice at home on Saturday. Yet the growing feeling is that these games will go a long way to defining what happens next season.

While Tuchel has used the safe argument that he's had to cope with too many injuries, some players seem to have had enough.

Using an expletive to describe his side's current form, center half Marquinhos  PSG's only player to face the media after the Montpellier game  delivered a broadside.

"If we keep losing games what's going to happen after?" he said.

"We'll take slaps from all sides, from the fans, from the media. We'll just prove them right."

While Tuchel has mostly refrained from criticizing the slack attitude of his players, Marquinhos is in no doubt that is where the problem lies.

"We have to know how to take our responsibility," he said.

"We're showing our bad side on the field. We need to be more mature." He appeared to question the work ethic of some of his teammates when he added: "We have to change our mentality and play like a team, when we have the ball and when we don't."

Marquinhos has played under four managers since joining the club in 2013. He stayed when he was out of favor, fought for his place and won it. And that gives the 24-year-old Brazil international credibility among fans and teammates.

"In the difficult moments we need to be more united, stronger," he said.

"People travel a long way to watch us play, we have a responsibility. Football isn't just about winning, winning, winning ... Some days when we are more tired it's difficult, we're not playing well technically. But we can do a lot better."

"Out of respect for PSG, for the jersey and the colors we're defending, we have to be more demanding of ourselves," Alves said.

"It's in these moments that you see the real players." PSG's difficulties on the field have been punctuated by distractions off it.

Neymar could face a suspension after lashing out at a fan filming and goading him and other PSG players after the French Cup defeat. Neymar is already suspended for three games in next season's Champions League after insulting officials earlier this season.

"Despite our friendship, I don't approve of what he did," said Alves, who also was teammates with Neymar at Barcelona. "At times he loses his self-control."

The spotlight will be intense on PSG this weekend against seventh-place Nice, which is coached by former France great Patrick Vieira.

Vieira's side is well drilled and its quick counterattacks could expose the ongoing weaknesses in PSG's defense.

Nice also has an exciting young prospect in Yucef Atal, a 22-year-old fullback full of pace and skill.

Atal's impact going forward is such that Vieira has recently been picking him as a winger, and he scored a brilliant hat trick against Guingamp last weekend.