In a squad of seven, only three were able to play the qualifier match. 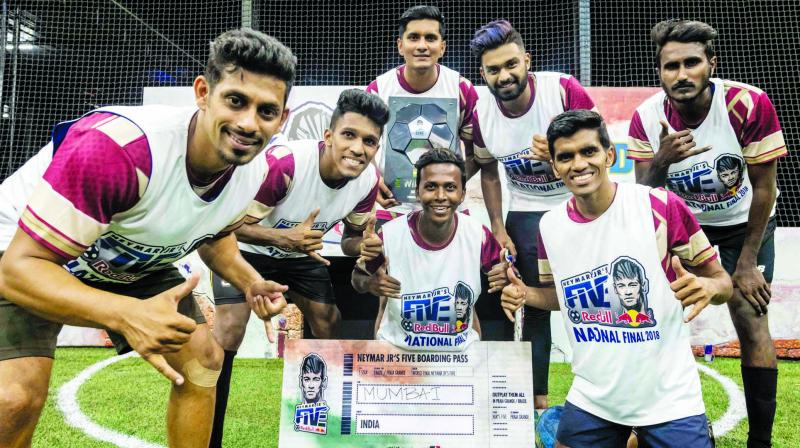 The winner is decided if one team loses all the players or the team with a higher score.

When Anthony Machado looks back on his team’s redoubtable feat over the past couple of years, he is not able to count the number of trophies that Joga Bonito has won. Adding another title to their cabinet, the Kalina-based amateur football team will head to Brazil for the world finals of ‘Neymar Jr’s five’ in July.

When the Mumbai qualifiers were being played on January 21 in Malabar Hill, most of the roads of the South Mumbai were reserved for the participants of the Mumbai Marathon. Machado who trains amateurs for marathons was running with his students before he could play with Joga Bonito for the qualifiers.

An excruciating run of 42 kilometres in the morning was not the end of the day for Machado. “There were hardly any taxis available for the players to reach the venue,” as he recalls. “I completed my run and went to the venue but a couple of our players
couldn’t get any conveyance to reach.”

The marathon and the venue were crossing paths, which is why no vehicles were allowed in that area. In a squad of seven, only three were present before the match. “We thought ofquitting,” he says. At that moment, that was the only possible outcome for Joga Bonito. But it would be a shame to not have the city’s best amateur football team in the first round.

“We asked the organisers if our manager could play,” he talks about the few intense minutes. “Even then we would be just four but that was our only chance.” Either way, the format of the competition is similar to this circumstance. The match is set with the time limit of 10 minutes. If one team scores, the other loses one player. The winner is decided if one team loses all the players or the team with a higher score.

Luckily for Joga Bonito, they were able to win that game and the players arrived for the remainder of the matches. “They walked from Mahalaxmi station to the venue,” as Machado remembers.