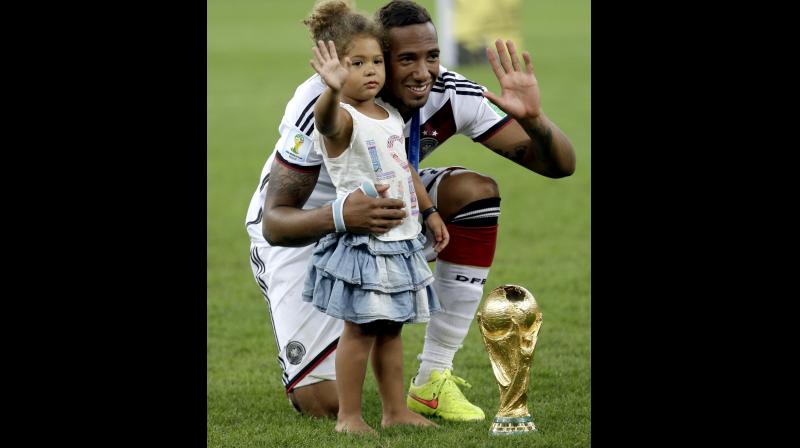 Germany's Jerome Boateng with the World Cup trophy and his daughter following their 1-0 victory over Argentina in the World Cup final in Rio de Janeiro in 2014. AP Photo

Paris: Bayern Munich have fined defender Jerome Boateng for leaving the city "without permission", an act in breach of the strict rules of confinement imposed due to the coronavirus outbreak.

According to TVO television, the 31-year-old had left the city in order to visit his son who suffered minor injuries in a road accident on Tuesday.

"Bayern defender Jerome Boateng left Munich yesterday without permission from the club," said the German champions in a statement.

"Boateng has transgressed the guidelines issued by the club by being too far away from his home.

"These guidelines govern the behaviour of the FC Bayern players in the current situation in line with government directives on restrictions on movement and the recommendations of the health authorities."

Bayern did not specify the amount of the fine which was being donated to local hospitals.

"I know it was certainly a mistake not to inform the club of my journey, but at the time, I was only thinking about my son,"Boateng told Bild newspaper.

"He was not in good health. If a son calls his father, then of course I will go, whatever the time of day."