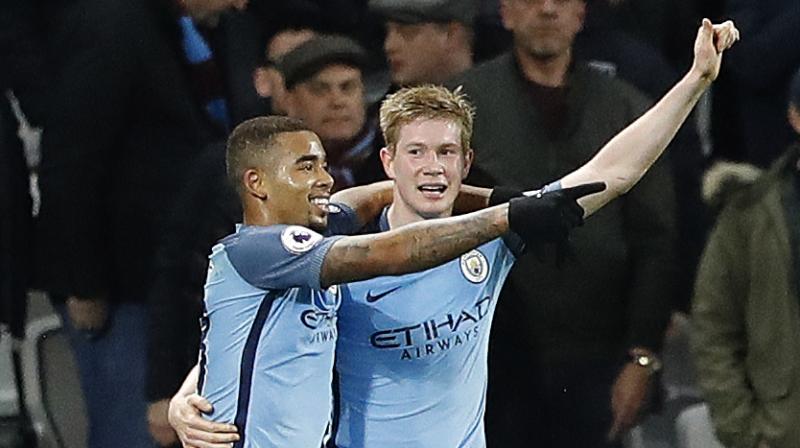 Manchester: Manchester City's players looked like they could score at will in their latest big win over West Ham.

Manchester United couldn't even manage one goal against Hull.

On an evening of contrasting fortunes in the Premier League for the Manchester giants' expensive strikeforces, City thrashed West Ham 4-0 away to close the gap on its rivals for Champions League qualification and United was held 0-0 by a team that started the game in last place.

City was the only member of the top six to win in the midweek round of fixtures and moved level on points with fourth-place Liverpool, with 15 games left this season. United is in sixth place, four points adrift of the top four after a third straight draw for Jose Mourinho's side.

While Zlatan Ibrahimovic and Paul Pogba were getting frustrated at Old Trafford, Gabriel Jesus was leading City's dismantling of West Ham on his first start for the team after being picked ahead of Sergio Aguero in what could be seen as a nod to the future.

Gabriel Jesus was joined on the scoresheet by Kevin De Bruyne, David Silva and Yaya Toure, whose penalty kept up his perfect record in 11 attempts from the spot for City. Aguero came on as a substitute in the second half and might have to get used to spending more time on the bench, given the pace and movement of City's front three - Raheem Sterling, Leroy Sane and Gabriel Jesus.

United was denied by a mixture of poor finishing and superb goalkeeping by Eldin Jakupovic, whose saves from Juan Mata and Paul Pogba stood out.

Draws are ruining United's chances of qualifying for the Champions League, the minimum requirement for Mourinho this season. This was United's ninth draw, matching Middlesbrough's league-high tally.

Silva tapped in at the far post in the 21st after a driving run by Sane and Jesus got his first City goal in the 39th when he slotted home Sterling's cross.

Sterling was tripped by Jose Fonte - making a miserable debut for West Ham after his move from Southampton - and Toure, as usual, made no mistake from the penalty spot.

City manager Pep Guardiola was excited by the performance of his front three, whose average age is 20, saying: "Those players are the future of the club."

Mourinho said it was a case of "deja vu" after another visiting team managed to stifle United at Old Trafford, after Burnley and Stoke in the first half of the season.

Jakupovic showed some brilliant reactions for his saves off Pogba, one in each half, and low down from substitute Mata, although Ibrahimovic was left unimpressed by the Hull goalkeeper.

"I did not see any chances where it was difficult for the goalkeeper," the Swedish striker said, "... some saves he made for the cameras."

United failed to take advantage of the top four dropping points on Tuesday. League leader Chelsea drew 0-0 at fourth-place Liverpool, Arsenal lost 2-1 at home to Watford and Tottenham was held 0-0 at Sunderland.

Peter Crouch became the 26th player to score 100 goals in the Premier League when he scored from close range in the seventh minute to put Stoke ahead. He marked the occasion by pulling out his old 'robot' dance.

Everton earned a point because of a 39th-minute own goal by Ryan Shawcross, who turned in a cross from Seamus Coleman.