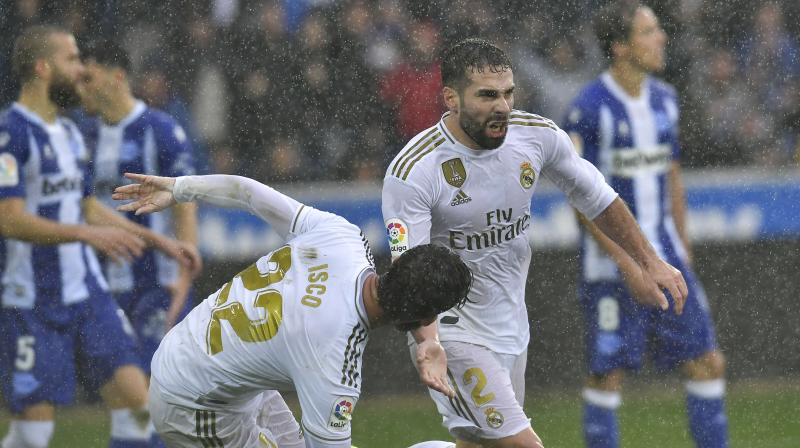 Real Madrid earned a spirited 2-1 win at Alaves on Saturday with a scrappy late goal from defender Dani Carvajal to open up a provisional three-point gap at the top of La Liga. (Photo:AP)

Vitoria-Gasteiz: Real Madrid earned a spirited 2-1 win at Alaves on Saturday with a scrappy late goal from defender Dani Carvajal to open up a provisional three-point gap at the top of La Liga.

Real captain Sergio Ramos put the visitors in front at a rain-soaked Mendizorrotza Stadium by heading home a Toni Kroos free kick after 52 minutes but gave away a penalty from which Lucas Perez levelled in the 65th.

Zinedine Zidane’s Real side demonstrated their new-found grit to re-take the lead four minutes later. Isco pounced to head a Luka Modric cross against the post and the ball trickled across to Carvajal, who bundled it in from close range.

Alaves threw bodies forward in search of an equaliser but Real stood firm, with Marcelo blocking a goal-bound shot and goalkeeper Alphonse Areola stopping an effort from the hosts’ captain Manu Garcia in the eight minutes of added time.

Real provisionally lead the standings on 31 points from 14 games ahead of champions Barcelona, who visit fellow title rivals Atletico Madrid on Sunday.

“We know that in stadiums like this teams always give everything against Real Madrid, and we coped very well with the kicks, the rain and the cold which was crucial because these are the games which win you league titles,” said Real’s Marcelo.

Alaves, who had lost only one of their previous seven home games this season and conceded only two goals on their own turf before facing Real, are 13th on 18 points.

Real were without Eden Hazard after he injured his ankle in Tuesday’s thrilling 2-2 draw with Paris St Germain in the Champions League, leaving Gareth Bale to make his first start for the club since Oct. 5.

Militao nearly gave away a penalty in the early stages when he stuck out a leg as Aleix Vidal rushed into the area, but the referee booked the Alaves player for diving instead.

Bale came close to giving Real the lead when he saw a header heavily deflected on to the near post, while Isco sent a shot narrowly over the bar later in the half.

It was far from a free-flowing display from Zidane’s side but the type of win that will give them confidence that they can overhaul an inconsistent Barca side in what is set to be a close-run title race.