Enzo, the oldest of Zidane's four sons, was introduced by his father, a legendary former player for Real and France, at half-time. 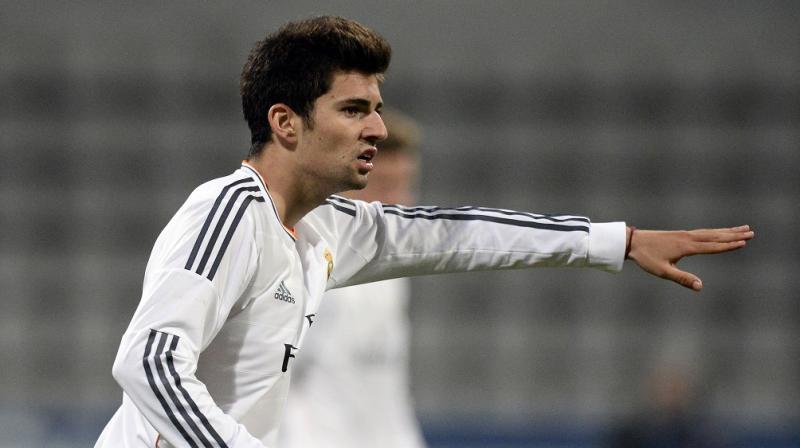 The 21-year-old was previously coached by Zinedine at Real's youth side Castilla before he took the top job at the Santiago Bernabeu in January. (Photo: AFP)

Madrid: Real Madrid coach Zinedine Zidane's son, Enzo, scored on his senior debut as the European champions brushed aside third tier Cultural Leonesa 6-1 to progress into the last 16 of the Copa del Rey 13-2 on aggregate on Wednesday.

Enzo, the oldest of Zidane's four sons, all of whom play at different levels in Real's youth teams, was introduced by his father, a legendary former player for Real and France, at half-time.

The 21-year-old, who was previously coached by Zinedine at Real's youth side Castilla before he took the top job at the Santiago Bernabeu in January, showed a glimpse of his father's talent with a fine low finish from the edge of the area just after the hour mark.

"If I take off my hat as a coach then I am happy for him as a father (too)," said Zidane.

"But, in saying that, I watch what he does on the field as a coach and I am happy with how they all played."

With the tie over as a contest following Real's 7-1 first leg win and El Clasico away to Barcelona to come on Saturday, Zidane made nine changes from the side that started the 2-1 win over Sporting Gijon last weekend.

Norwegian starlet Martin Odegaard, 17, was also handed his full debut, but it was Dominican international Mariano Diaz who got Real off to a flying start as he slotted home the first of his hat-trick after just 23 seconds.

James Rodriguez headed home the hosts' second before Mariano smashed in a third, but Leonesa did have a moment to savour when Yeray Gonzalez fired into the top corner from long range in first-half stoppage time.

Enzo was then handed his long-awaited bow by his father, but ensured there was to be no claims of nepotism when he finished off a flowing team move with a classy right-footed finish.

Mariano completed his hat-trick two minutes from time before a Cesar Morgado own goal.

Yannick Carrasco scored twice as Atletico Madrid also hit Guijelo for six in the first leg of their last 32 tie.

Angel Correa and Roberto Nunez rounded off the scoring.

Joaquin Correa scored a hat-trick in Sevilla's 5-1 win at Formentera, whilst Villarreal cruised to a 3-0 victory at Toledo.

Second division Cordoba produced the only upset of the evening with a 2-0 win over Malaga.

Holders Barcelona begin their defence later on Wednesday at Hercules.